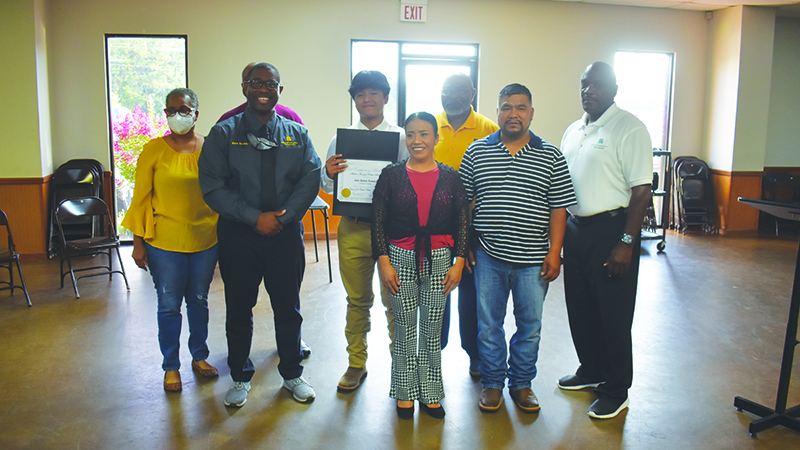 “Each year, the City of LaFayette and AMEA get together each year, and we come together to form this scholarship of $2,500,” said LaFayette Mayor Kenneth Vines.

Vines said he attended an awards ceremony at Chambers Academy and saw Ramirez win several awards. He called Ramirez “a very intelligent young man” and told him to come back to LaFayette after he got his degree.

In other business at the meeting, City Attorney Joseph Tucker said the City of LaFayette didn’t owe a local resident her money back for paying to be on the city’s sewer system. At a previous meeting, Wright had complained to the city council that she had been charged for city sewage even though her house had a septic tank. She said she bought the house in 2016, unaware that the tank was there.

Tucker had said Wright’s property violated an ordinance that was passed in 1993. In 1993, every house was required to hook up to the sewer system if it was close enough.

At Monday’s meeting, Councilmember Toney Thomas asked how the city could charge someone for services they weren’t rendered.

Tucker said the ordinance was passed so the city could afford to pay bonds back for a sewage plant that had been built.

In other business, Tucker brought up three issues from a Zoning & Planning Commission meeting on April 28 for the council to vote on.

“This store is B1, whereas the hardware store and other stuff across the road are B3,” Tucker said. “I don’t know why that is. They are different zoning classifications.”

Tucker said the owner of the business wanted create a liquor store.

The council didn’t vote on the issue.

Tucker said the next issue he had for the council to vote on would be an easier decision. Land developer Jack Holloway had purchased a large house on a hill across from Vines Funeral Home.

“And he has now torn that house down and is getting ready to develop it,” Tucker said.

The problem, Tucker said, was that some of the area was zoned for manufacturing.

“The line for the residential and the manufacturing runs on that street that the house lot butts on,” he said.

“It’s got to run for three weeks in the paper,” Tucker said.

The council voted to schedule the public hearing for Holloway’s property.

Tucker went over one last item.

Tucker said the Planning Commission made a recommendation that the ordinance be considered at a public hearing.

The council voted to have a public hearing on the ordinance on July 11.

In other business, in an interview, LaFayette Mayor Kenneth Vines said the process for choosing a new city councilmember to replace T. Shannon Hunter, who recently resigned, was going well. He said the council had a list of names of applicants that it would review by July 11. June 30 is the cutoff date to apply for the position, he said.