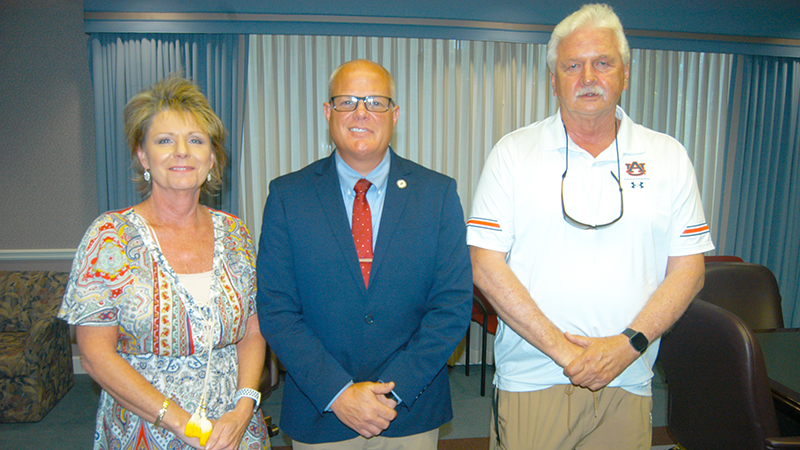 Talking consolidation: Chambers County Superintendent of Education Casey Chambley (at center) talked about the need for some major change in the school district at Thursday’s meeting of the West Point Rotary Club. Chambley is shown above with Rotary Club members Julie Ambrose (left) and Greg Duffey (right). Photo by Wayne Clark.

WEST POINT — Chambers County Superintendent of Education Casey Chambley talked about the need for consolidation at Thursday’s noon hour meeting of the West Point Rotary Club, held in the conference room at Capital City Bank. He made the case that it’s time to face the simple fact that the school district isn’t what it once was. Enrollment has declined ever since the textile industry shut down in the local area in the early 2000s. At one time, the school district had an estimated 4,500 students. It’s now down to around 1,900.

The school district has been operating 11 campuses since the last round of consolidation in 1991. At that time, Chambers County High in Milltown and River View Elementary in Valley were closed and Five Points was changed from being K-12 to K-9.

Five Points recently ended the school year with 92 students. It’s difficult to justify having a K-8 school with numbers that low. With teacher units from the state being based on enrollment, Five Points was down to 5.78 units. This meant combining some grade levels so one teacher could teach students in two grades at the same time.

Chambley said that declining enrollment has a domino effect. “When you lose enrollment, you lose funding,” he said. “That means you cut back on staff.”

There’s also a lot of vacant classroom space in buildings that were designed for larger student populations.

Chambley said the system’s 11 campuses are being utilized at 55 percent capacity overall and 49 percent at the elementary school level. The system has to heat, cool and maintain space that’s not being used.

According to state policy, a school has to have at least 500 students to have a full unit for a principal. Very few Chambers County schools meet this. This limited them to a half unit for administration. It’s a similar situation for counselors and media specialists. In many cases, they are spending half a day at one school and half a day at another one.

The local system is under pressure to fund positions with local units.

“It really adds up when you do that,” Chambley said.

“Until they went in and looked at this, I had no idea we were as inefficient with our buildings as we were,” he said. “We have been spending a good portion of our budget to keep open inefficient campuses.”

Another problem is that many the school buildings are of advanced age and not in solid structural shape. The main building at LaFayette High dates to 1927. Valley High has been in the same location since 1939.

Toward the start of this past school year, a teacher fell through the floor at Lafayette Lanier Elementary School in Valley. Fortunately, she wasn’t seriously injured, but it could have been worse.

“We have been having a termite problem in Langdale,” Chambley said.

Chambley is confident the buildings can find new uses when closed with consolidation. Lafayette Lanier Elementary, for example, could be converted into apartments. The 1935-era building is in a good location, has a classic appearance and when renovated for apartment living should play a new role in community life. West Point has had similar success with the College Hill apartments.

Chambley mentioned the example of Plainview School, located near the Tallapoosa County line on Highway 50. After being closed by the CCSD, it has found new life as a Head Start center.

Chambley’s dad, George Chambley, was a star football player on Valley High’s state championship team in 1962. His mom was a cheerleader at VHS.

“I know what our schools mean to the community,” he said. “I grew up hearing my dad tell me what it was to be a Ram.”

Young people coming along in future years will build on such traditions with something new. A new high school that is being planned will have a new name, school colors and a new mascot.

Chambley sees consolidation as the key to providing every student in Chambers County a fair opportunity to get the best education possible. Valley High now has an enrollment of well over 500 students and can offer elective courses that can’t be offered at LaFayette High, which has a smaller enrollment. Chambley mentioned the example of his son being able to take a guitar course at VHS. The same course and other electives can’t be offered at LaFayette High because of a smaller enrollment.

“We want to fix this situation the best way we can,” he said.”We want to be able to provide as many opportunities in as many interest areas as we can.”

Chambley believes it will be a good move to have the students in uniforms. Lanett has done this with success.

“We are preparing today’s students for tomorrow’s workforce,” he said. “Many companies today’s student will be working for have their people in uniforms. It’s all a part of having a disciplined environment. I believe each person should be doing what they are supposed to be doing, when they are supposed to be doing it and doing what is expected of them.”

Chambley said he is well aware that there will be bumps in the road in bringing major change but that it will be for the best,

“It may not be popular with some people,” he said, “but it’s not my job to be popular and to make everyone happy. My job is to make decisions that will be in the best interests of the students and to put them on a path where they can be successful in life.”

Architectural firms are now being reviewed for a design for a new consolidated high school. Three or four different sites are being considered for the new school.

“We hope to have a design by August and to break ground next March,” Chambley said. “It should take between 18 and 24 months to build. We hope to open the new school at the start of the 2025-26 school year.”

There will be a transition period where students can work out some issues and come together as a new family. At some point, W.F. Burns Middle School will close with the present Valley High campus becoming a new middle school.

A member of the club asked Chambley if the current campuses were as safe as they could be. He said he knew how important this is.

“It’s at the top of everyone’s list right now,” he said. “I started my career in education as a safety coordinator.”

Chambley said that people need to keep in mind that there’s just no way to stop all evil acts.

“No matter how many doors are locked and how many armed security guards there are on campus, if someone is determined enough they will find a way to cause harm. It’s our job to limit opportunities for this as much as we can.”

The school that will be built will have many safety features in its design, but there are limits. “We don’t want our students and our teachers living in prisons,” Chambley said.

“Kids are kids,” he said. “They haven’t changed. What has changed are the parents.”