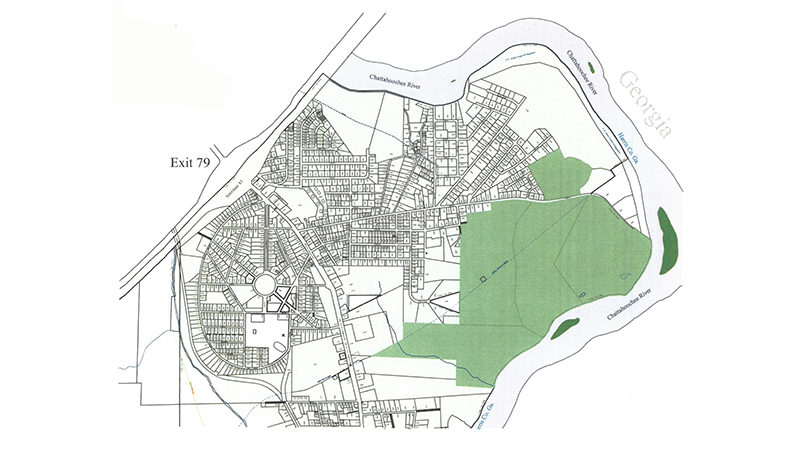 New land purchase: The land purchased by the city of Valley is colored green in the illustration above. Image contributed.

VALLEY — In recent years, the City of Valley has made some sizable land purchases on the west side of town near in Exit 77 off I-85. It’s prime real estate for commercial, industrial and residential development, and much of the more than 1,200 acres that is city-owned is now under development.

On Monday, the Valley City Council unanimously approved the purchase of another large tract of land on the east side of town bordering the Chattahoochee River. The city is purchasing approximately 370 acres from Clovernook Land LLC, David & Mary Price Joint Trust and Margaret Rollison for $1,350,500.

The land is located near the end of 30th Street in Shawmut. It touches the city-owned 92-acre Shawmut airport side on the north end and extends southward along the river in the direction of EAMC-Lanier Hospital. Two small islands in the river that are located in Harris County are included in the purchase. The land has vast potential for recreational and/or residential development.

While not opposing the move, Council Member Jim Jones said he would liked to have had a proposed land purchase discussed among the entire council.

“Maybe we should have had a called meeting to discuss it,” he said.

Mayor Leonard Riley said the city was in an ideal position to make the purchase but could have lost out to another party had prompt action not been taken.

“We can make this purchase with cash,” he said. “We don’t have to borrow the money or do it with a bond.”

Council Member Kendall Andrews said that he’d like to see the land developed as a recreation site.

“I would love to see us do something recreation-wise,” he said. “Maybe have some walking trails along the river.”

With Monday’s land purchase, the city is now in control of more than 1,600 acres on its eastern and western ends.

On another topic, Andrews said he’d like to see a final closeout on the cleanup of the Riverdale Mill site.

“At one time, they were making some really good progress there, but it has slowed down,” he said. “I would like to see us set a deadline in the coming days. This has been going on too long.”

“I don’t disagree with you,” Riley said. “Let me talk to them, and I will get back with the council.”

The council approved a five-item consent agenda. This includes a total of $13,218.16 in the repair of a police vehicle damaged in an accident. Insurance covered the cost. The Public Works Department budget was amended to include an insurance recovery in the amount of $3,233.03 to cover the cost of repairing a vehicle that had been damaged in another accident.

A quote was approved for Freeman’s Custom Windows in the amount of $14,950 to replace some windows at Valley Police Department.

A resolution was approved to permit the consumption of alcoholic beverages at a wedding at the Lakeview Cabin on August 20.

Planning & Development Director Travis Carter told the council that the city continues to be deluged with complaints over the job being done by solid waste contractor AmWaste.

“The past two weeks have been the worst yet,” he said. “We got 15 complaints today.”

Carter said that Amwaste is continuing to have problems in getting people to work for them.

“Hopefully, they are getting better,” he said. “They are not missing entire streets now.”

Valley Parks & Recreation Director Laurie Blount told the council that Valley will have two teams in the state girls softball finals to be hosted at Valley Sportsplex the week of July 8. The 7 & 8-year-old and the 11 & 12-year-old teams won at district to make the state finals. That same weekend, Valley will have a team playing in the Dixie Boys state finals in Tuscaloosa.

Blount said that the summer crops are starting to show up at Valley Farmer’s Market, which is open every Friday from 3 to 6 p.m. EDT.

“We had both red and green tomatoes this past Friday,” she said. “We will have Free Tomato Sandwich Day at the Farmer’s Market on July 8 and Free Slice of Watermelon Day on Aug. 12.”

An Independence Day fireworks show will be taking place at Valley Sportsplex when it’s good and dark on Monday, July 4.

“It’s going to be in the same location where we have had it for the past few years,” Blount said.

Council Member Jim Clark said he was pleased to have seen the city’s new street sweeper cleaning the streets in his district.

“We did get the trash picked up on Saturday,” he said. “It was two days late.”