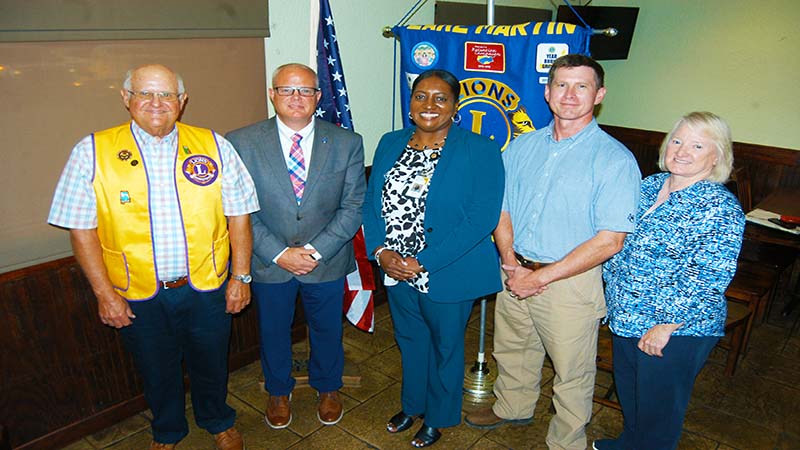 VALLEY — The superintendents of the Chambers County and Lanett school systems and the Chambers County highway engineer were the guest speakers at the Monday evening meeting of the Valley Lions Club, held at San Marcos Mexican Restaurant. Casey Chambley, Jennifer Boyd and Josh Harvill took turns in talking about how important it is for both our public schools and for continuing Chambers County road improvements to get this six-mill tax extended.

The tax was first approved in 2003 for a 20-year period, which expires this year. A yes vote on Tuesday, June 21 will extend it for 20 more years.

Commission Chair Debra Riley and Commissioner Sam Bradford were present at the meeting and spoke in favor of extending this ad valorem tax.

“Our schools are not fully funded by the state and federal governments,” Boyd said. “Local revenue is very important to us. It would be very detrimental to us to lose this. Our biggest source of local funding is ad valorem tax.”

In Alabama, property tax is based on property classification, millage rates and exemptions. One mill is one-tenth of one percent, or .001. Six mills come to $0.006.

A Lanett resident living in a single-family home on a quarter-acre lot would pay a little more than $30 a year for this six-mill tax. That comes down to $2.63 cents a month or 70 cents per week. By comparison, a gallon of milk at Kroger costs $4.03 and a package of hamburger meat $4.57.

Boyd said this tax helps Lanett City Schools with hiring additional teachers and support staff, funding after-school programs and summer learning opportunities, having adequate instructional materials and classroom supplies, to maintain and provide fuel for the transportation system, the upkeep of facilities and having capital improvements.

The extension of the tax, Boyd said, will aid in Lanett’s goals of having an additional school resource officer, having some security and safety upgrades, building needed classrooms at Lanett High and completing needed building improvements for the system.

“It takes money to have capital projects and to have your campus looking good,” Boyd said. “This six-mill tax has allowed us to do some things we could not have done without it. I hope you can see that my passion is to meet the needs of our students. We want everyone to know that we can do a lot for a small system when we have adequate funding. We can do together when we come together.”

Harvill said people need to understand what one mill is. “It’s not one million dollars,” he said. “It’s really a very small amount.”

Harvill said the highway department very much needs for the tax to be extended. He said that inflation is hitting road construction really hard, and his department will need all the revenue it can get just to stay even.

“Asphalt prices have gone up 10 percent this year,” he said. “With gas costing so much, people are driving less. What we get from the gas tax goes down because of this. Ad valorem taxes are stable. You get the same amount every year.”

Harvill said that road projects can be highly complex and time-consuming.

“Nine times out of ten, if a road is not in good shape it’s probably because it’s not draining well. For roads to drain properly, they have to be built right from the bottom up.”

The road department recently had to replace nine pipes on a road in northern Chambers County. This was because the road had some age on it and wasn’t draining well.

“It took us two months to do it,” Harvill said. “We have a lot of aging infrastructure, and a lot of needs for our roads and bridges. Our highway department budget is $4 million a year, and 25 percent of that is this tax. We are dealing with crazy times right now. It will really set us back to lose this tax.”

The highway department has a lot on its plate this year. This includes the construction of a 155-foot bridge over the Norfolk Southern Railroad near Waverly, the road widening project on Phillips Road near Huguley Elementary School, a lighting and traffic signal project on Exit 79 on I-85, and widening and resurfacing projects on several county roads, plus the resurfacing of 2.55 miles on Hopewell Road.

The six-mill tax has played a big part in improving county roads.

“This tax was approved by the voters in 2003, went into effect the next year but it wasn’t until 2005 that we started seeing the benefits of it,” Harvill said. “At that time, 70 percent of our county roads were rated at C or below. Since that time, our rating has improved. Fifty percent of our roads are rated B or above. We still have a long way to go for our roads to be where we’d like for them to be, but the only way to make progress is if you have adequate revenue to work with. The three mills we get from this tax has helped us a lot.”

Chambers County Superintendent Casey Chambley posed the hypothetical example of what a typical Valley resident would pay in this tax in one year. If a family home and garage was located on a half-acre lot, it would have an appraised value of $124,460 and an assessed value of $12,440. When the assessed value is multiplied by .006 it comes to $74.64 per year. This breaks down to $6.22 per month and $1.50 per week. By comparison, a Big Mac at McDonald’s in Valley costs around $4.

“We are not talking about a new tax,” Chambley said. “We have been paying it for the past 20 years.”

“$310,000 of our payroll this past year came from ad valorem tax,” he said. “Many of our school buildings are aging, and we need new capital projects. Three mills for our district comes to around $1 million a year. It would be devastating and crippling for us to lose this. We have to have funding to keep up with rising costs. In 2000, the standard building cost was about $175 to $200 per square foot. That’s now up to $350 to $400 per square foot.”

It’s estimated that a new STEAM magnet school would cost around $15 million to build. The annual payment for it would be $850,000.

“It is so important for us to support our local businesses,” Chambley said. “When we shop locally, the tax dollars stay at home. It helps the county commission, local cities and our school systems.”

Commission Chair Debra Riley asked Lions Club members for their help in getting out the vote next Tuesday.

“Talk to your friends and neighbors and get them to vote for this,” she said. “Everyone needs to understand that it’s a renewal and not a new tax.”

A member of the club asked if Alabama would suspend the state’s 10-cent gas tax until the price of gasoline starts coming down. When they said Georgia has made such a move, Commissioner Sam Bradford said that Georgia had more leverage on this than Alabama.

“Their property tax is two-and-a-half to three times what it is here,” he said.