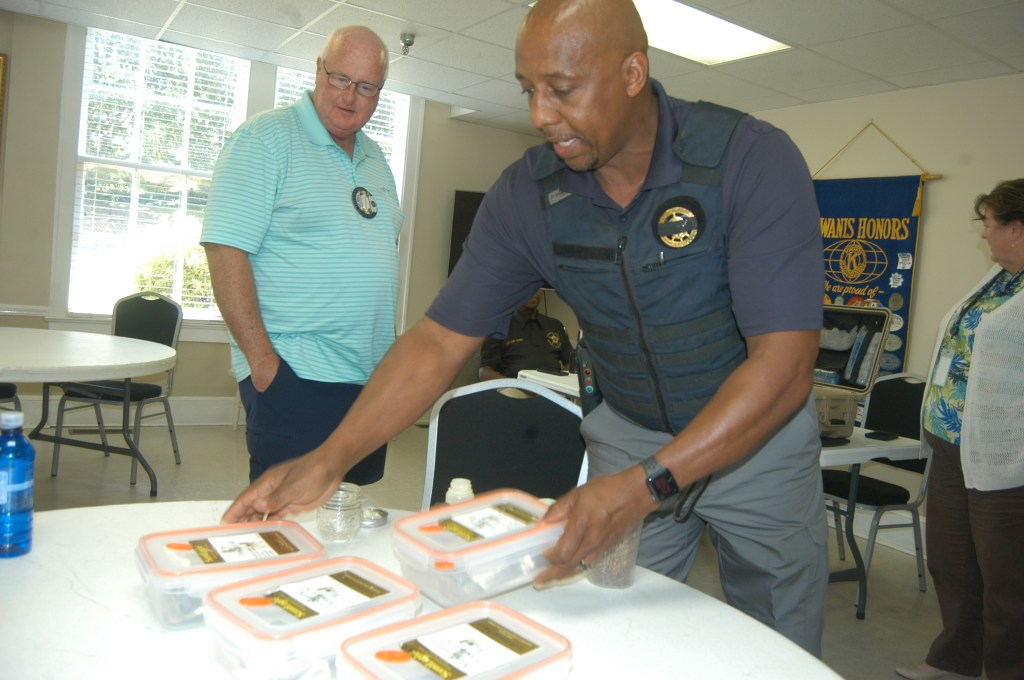 VALLEY — At Wednesday’s noonhour meeting of the Kiwanis Club of Valley, officers from the Chambers County Drug Task Force had a sobering message for the parents of today’s young teens: smoking weed can be a lot more dangerous than it was years down the road.

“Marijuana that’s out on the street is not the same thing it was just a few years ago,” said DTF Commander Steve Smith. “Many of the drugs that are being sold on the street contain fentanyl, something that’s 50 to 100 times more potent than morphine.”

Drug pushers are mixing fentanyl with other drugs they are selling to get users addicted to something that produces a powerful high but can easily kill. Drug pushers know that the greater the high, the more people will pay for it.

“All drugs are being laced with fentanyl,” Smith said. “We have had to bring people back with narcan who were on that stuff.”

Fentanyl is a synthetic opioid that was developed to help ease the pain being experienced by cancer victims. Because of its powerful opioid properties, the drug has found its way to the streets. Much of it is being manufactured illegally in Mexico and smuggled across the border.

In a rising number of cases, people who didn’t know they had taken fentanyl are dying of overdoses. They purchased marijuana, cocaine or heroin that had been laced with it.

“Fentanyl is very dangerous,” he said. “We are now masking up and using gloves when we are dealing with any kind of drugs. Just the possibility fentanyl might be in it is well worth the precautions we are taking. People are now taking stuff they have no idea of how it’s harming their body.”

Drug enforcement officers are well familiar with an incident that took place in Ohio. A driver was pulled over with a large amount of illegal drugs in the car. The driver was arrested and the drugs confiscated. When one of the officers went back to the police station, a fellow officer told him he needed to remove that white powder from his shirt. He attempted to brush it off, but the hand action caused him to unintentionally inhale the vapor. Almost immediately, the officer crumpled to the floor and started foaming at the mouth. Fortunately, nearby officers had some narcan, but it took three doses to revive him.

Narcan nasal spray is a prescription medicine used for the treatment of a known or suspected opioid overdose emergency with signs of breathing problems.

Smith said the drug pushers are turning to fentanyl because of the quick, intense high it produces. People know it’s dangerous and are reluctant to purchase it, but when it’s mixed with heroin or cocaine, the user thinks the dangerous high they are on will be okay because they have been high on cocaine and/or heroin before. They quickly become addicted and go back for more purchases of that same stuff not knowing what they are taking has been laced with fentanyl and could easily kill them.

All drug dealers know that the money is in getting people high. The more intense that high, the more money they can make with repeat sales.

Homemade meth was once a big problem, but drug users have shifted away from it.

Meth is still very much out there, but it’s being manufactured in Mexico and gotten to Atlanta by the drug cartels.

“Ninety percent of what we are finding here was sent here by a cartel and came south from Atlanta,” Smith said.

Smith said that drug abuse looks to be a never-ending cycle.

“Lots of people in Chambers County have little idea of what we do,” he said. “They have no idea of how much dope we are getting off the streets. In this cycle that seems to never end, we arrest the same people over and over again. The court system is doing the best it can, but if they deal with 600 cases it would take them five years to handle the arrests we made in the last year.”

One of the most disturbing trends out there now is that dangerous drugs are being disguised as candy and given to children to get them hooked at an early age.

More and more children are being introduced to marijuana not as a green, leafy substance, but as lollipops, cereal, gummies and other candies they are used to eating.

There have been incidents in Georgia where scores of children became sick after Valentine’s Day parties. When they were being treated for their illness, they were found to be positive for THC, the active substance in marijuana.

Members of the club got a chance to see what Chambers County’s new drug dog Pioron can do. He’s a two-year-old Dutch Shepherd who’s handled by Lawrence Howell.

The dog is unbelievably good in finding drugs that have been hidden. His keen sense of smell takes him right to it. The dog is obedient and friendly, but if someone gives the drug enforcement officers any flack, Pioron is allowed to bite.