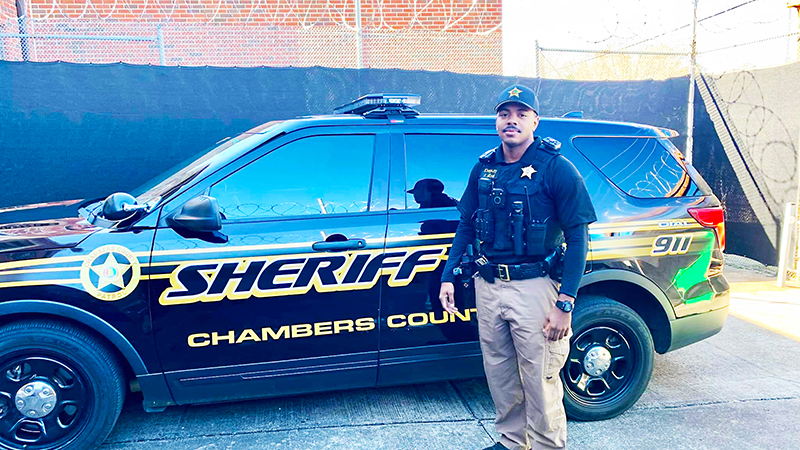 Gone too soon: Chambers County Deputy J’Mar Abel was killed in the line of duty Monday. Abel was assisting Roanoke Police as they attempted to conduct a traffic stop when Abel lost control of his vehicle. Photo contributed.

A 24-year-old deputy with the Chambers County Sheriff’s Department, J’Mar Abel, died Monday while was assisting the Roanoke Police Department in a vehicle chase when he lost control of his vehicle on County Road 278. He was transported to West Georgia Medical Center where he was pronounced deceased.

J’Mar worked with the sheriff’s department for two years, with Monday being his exactly two years since he began his career at CCSD.

J’Mar was an athlete in school. Martin said he never caused any problems and was a good kid.

Martin said his son had always wanted to be a police officer.

“I remember coming home, and J’Mar was sitting and watching ‘Cops,’” he said.

J’Mar had a strong sense of justice, Martin said, adding that when his son saw someone being bullied, he’d intervene.

Martin and J’Mar used to go to a shooting range together. Martin originally taught J’Mar how to shoot, and they’d compete with each other. Eventually, J’Mar won, and Martin could tell from this that being a police officer was J’Mar’s dream.

Martin said he served in the military as a military police officer, which may have inspired J’Mar to follow in his footsteps.

“I think he would have gone into the military, and that’s kind of what I wanted him to do,” he said. “Go in the Air Force, not the Army, to be a security force. But his heart was set on becoming a police officer. He loved it.”

Martin and his son talked often. J’Mar used to talk about being a police officer “all the time,” Martin said.

“Just this past Saturday, he came up… and every time I see him, he’s got his badge and gun sticking out,” he said. “He loved being in law enforcement. He loved it.”

“You know how you run across a young person and they’re focused on what they want to do?” he said. “He had told me that he was going to stay where he was at for a couple more months. Maybe a year. He was really looking at going either state or federal. He had mentioned federal.”

“He went one year to play basketball in Kansas at Kansas Christian College,” Martin said.

“J’Mar was a son, brother, nephew, cousin, grandson, protector and soon-to-be father to a little girl!” she said. “I’m proud and honored to have watch him grow into the man he became.”