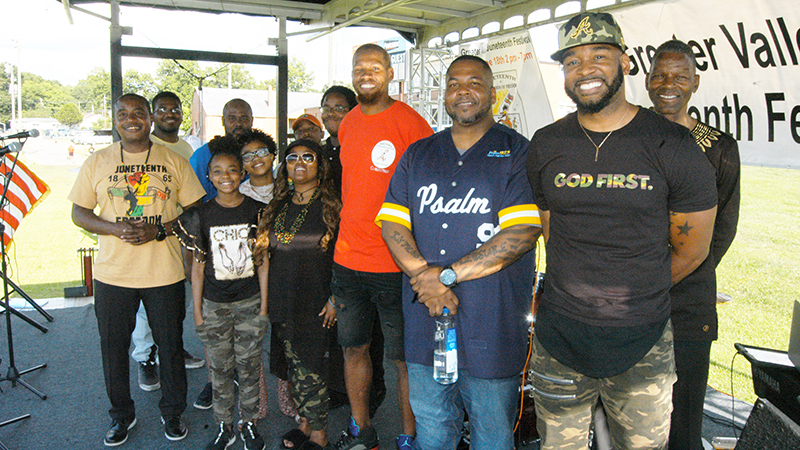 Gospel Fest performers: This year’s Juneteenth celebration got off to a rousing start on Saturday afternoon with a Gospel Fest at Franklin Court in Lanett. Among those performing from the stage were, from left, the Lewis Family, De’Niro Hightower, James “Boomer” Harris, Shawn Blount and Mytrell “Trello” Foreman. In back, at right, is Lanett Council Member Tony Malone, who welcomed the crowd on behalf of the city. The Lewis Family includes Jordan Lewis, Kalisa Lynch, Jazmyne Lewis, J.J. Lewis and Shenika Lynch-Lewis. Photo by Wayne Clark.

LANETT — The ball field area behind the L.B. Sykes Community Center was filled with tents Saturday afternoon. A sizable crowd of attendees were sheltering from the sun as they enjoyed Gospel Fest 2022, an event that kicked off this year’s local Juneteenth celebrations. This year’s essay winners will be selected next weekend and the big celebration will be taking place in downtown Lanett on Saturday, June 18.

Live performances took place on a stage that was set up behind the community center in an area known as Franklin Court. The outdoor recreation area was given that name by the Lanett City Council in memory of James Franklin in 2003. Franklin was a graduate of Alabama State University and a former U.S. Marine. He was a long-time recreation director in Lanett for WestPoint Pepperell and had served as a board member for Lanett City Schools, East Alabama Mental Health, Bradshaw-Chambers County Library, Junior Achievement and the Chambers County Development Board.

Former Lanett High and collegiate track star James “Boomer” Harris warmed up the crowd by telling them to get ready to rock the town.

“I have heard you yelling at football games, basketball games and at track meets,” he said. “I know you can make noise!”

“Y’all are not going to be able to sit,” said program emcee Bishop Winston Fannings. “We are going to have everyone jumping around!”

The music ranged from contemporary gospel to Christian hip-hop.

Lanett Council Member Tony Malone welcomed everyone on behalf of the city.

“I am so honored to kick -off this year’s Juneteenth celebration,” he said. “The big celebration will be taking place around the downtown fountain. It will be going on from 2 p.m. to 7 p.m. There will be lots of food vendors and fun. We will end the day with a fireworks show at the old mill site.”

Malone said the Juneteenth is a time to remember those who came before.

“When our ancestors started arriving on America’s shores in 1619 they could not have imagined the hardship journey that was before them because they were enslaved,” Malone said. “They also could not comprehend a legacy they would leave. Across the ages, I call on them today. I believe they are here in spirit with us. We still have lots of work to do in honoring the sacrifices they made. As a people, we will overcome despite many obstacles that remain in our way.”

The Rev. Kelsey Barnes, pastor of Goodsell Methodist Church in Lanett, encouraged those gathered to think in terms of education before celebration.

“Let’s be educated about what we are celebrating,” he said. “Juneteenth is the oldest celebration marking the end of slavery in the U.S. Slavery was a brutal experience for black people. They were taken from their homeland in Africa and brought to this country in chains. A great country was founded in America in 1776, but it was built on the backs of enslaved Africans.”

Foreman is originally from Atlanta and is now a well-known Christian hip-hop artist in southern California. His heart is still in “the ATL” – he wore a camouflage Atlanta Braves cap during his performance.

“I am what God says I am on any given day,” he said on Twitter. “My aim is to influence as many people as possible to better themselves. I want people to live for a purpose, to create new lanes for music and visuals.”

Christian hip-hop is a form of preaching through music. It’s Trello’s goal for his music to encourage today’s youth to develop one-on-one relationships with God.

Drawings were held throughout the event to award such prizes as $25 gift cards to Kroger, t-shirts, hats and a caramel pound cake donated by Tony Malone.

“Gospel Fest was a big success,” said Greater Valley Area Juneteenth Committee member Trudye Johnson. “We had a steady stream of people coming throughout the day, and we were pleased to have people from the nearby public housing area watching from lawn chairs. The performers were great. It was a youth-oriented event, and everyone could feel the energy. There was a whole lot of good fellowship on Saturday, and we liked that.”

Also called Freedom Day, Juneteenth is the oldest nationally celebrated commemoration of the ending of slavery in the U.S. Now recognized as a federal holiday, Juneteenth is widely viewed as the country’s longest-running African-American holiday and has been called America’s Second Independence Day.

The celebration dates to June 19, 1865, when Black people in Galveston, Texas were informed of their freedom by General Gordon Granger. The announcement set off a joyful celebration on the part of those who had been newly freed. The spirit of that celebration continues today. Many U.S. states, including Alabama and Georgia, have long recognized Juneteenth as a state event. It has been a national holiday since 2021.