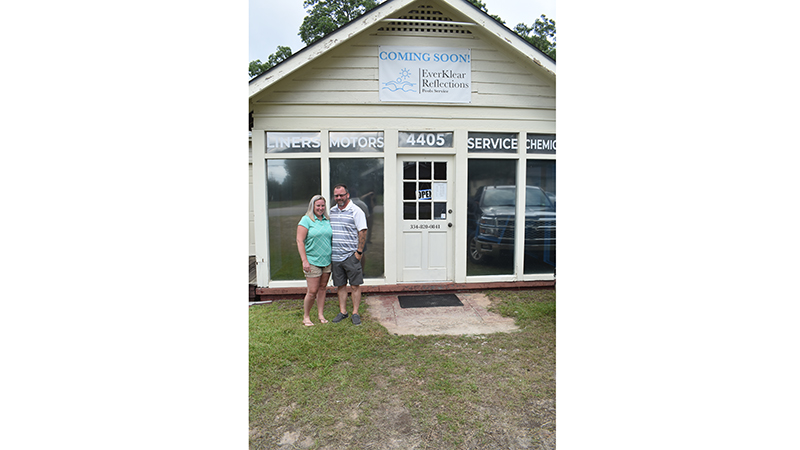 On Saturday, Michael and Asheley Cook, owners of EverKlear Reflections Pool & Spa Service, held a grand opening celebration for their new store in Valley, located at 4405 20th Avenue. They served customers hamburgers, hot dogs, cookies and chips and drew their names from a fishbowl to win prizes such as free pool shock and discounts.

There were about 20 customers, and each won something, Michael said.

He said the traffic was good for a pool store, as not everybody has a pool.

Michael said the event was a little under-planned, but it still turned out okay.

“We’ve seen some new faces,” he said. “We probably should have put some balloons or something out there, but we did get traffic.”

The Cooks hope their business will grow. Asheley said she hopes EverKlear Reflections Pool & Spa Service will expand to LaGrange and Phenix City.

“I want to get into installs, in-grounds, but right now, we can’t do that,” Asheley said. “But we can do above-ground installs.”

To get a license to install in-ground pools, the Cooks would have to work for competing businesses for a year, Asheley said.

“And then, you have to go in front of a board, and they have to recommend you to do installs,” she said.

While a few items are on display in the front of the store, more is stored in the back. Asheley said that if something isn’t in stock, she and Michael can order it.

There is a porch swing near the entrance of the store for customers to sit on while they wait for service. Asheley said she likes to lie on it and watch cars go by.

“We have a Keurig,” Asheley said. “I have to get it set up an everything. But we’re going to have a little coffee area over here, and it’s going to be free for all police officers, firefighters and EMTs and stuff, so if they want to stop by and get a cup of coffee or hot chocolate [they are welcome to.]”

Parking space is limited in the front, but customers are allowed to park behind the store.

Before the Cooks had a physical store, they had been running their pool business for about five years. They used the money they earned from that to open the store, Michael said.