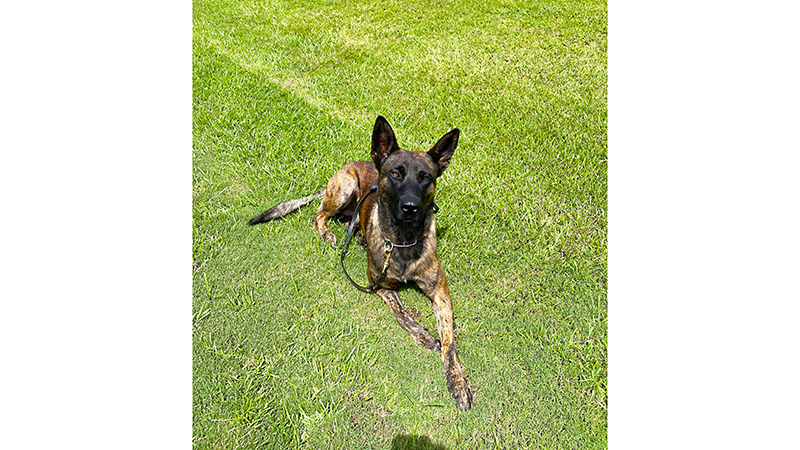 K9 Kye of the Oklahoma City Police Department succumbed to stab wounds in 2014 the day after attempting to take down a subject, according to Officer Down Memorial Page.

Officers and troopers had pursued the subject for over 30 minutes before he crashed on I-35. K9 Kye was released as the subject fled on foot. As Kye bit the subject, the man stabbed him several times. Unable to separate them, Kye’s handler fatally shot the subject when he refused to drop the knife. Kye was taken to an animal hospital where he died the following day.

Sandy Marcal, ​​founder and president of Vested Interest in K9s, Inc. said that each vest donated by her organization costs about $960 but is worth $1,700 to $2,200 depending on what kind it is.

Marcal said it’s her organization’s pleasure to provide the gift of protection so Pioron can work as safely as possible.

The website for Vested Interest in K9s, Inc., www.vik9s.org, states that since it was established in 2009, the organization has donated over 4,650 ballistic vests to law enforcement K9s in all 50 states. This potentially lifesaving body armor is U.S.-made, custom-fitted, and certified by the National Institute of Justice. According to Spartan Armor Systems, which sells armor online, the NIJ “sets the standards and testing protocols for body armor ratings and levels, which dictate the caliber and threat level that body armor plates can withstand.”

Each vest from Vested Interest in K9s, Inc. weighs an average of 4 to 5 pounds and comes with a five-year warranty.

The vest program is open to U.S. dogs that are at least 20 months old and actively employed and certified with law enforcement or related agencies. K9s with expired vests are also eligible to participate.

Vested Interest in K9s, Inc. is funded through contributions, grants and fundraising events. It accepts tax-deductible contributions in any amount. The organization provides information, lists events and accepts donations at www.vik9s.org, or you may mail your contribution to P.O. Box 9, East Taunton, MA 02718.

Utility system superintendent shares his thoughts ahead of Alabama…