LaFayette volleyball relies on experience despite lack of numbers 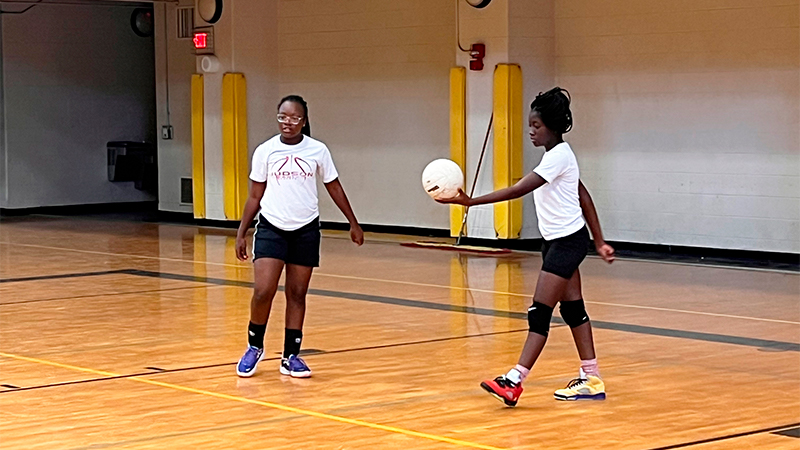 LaFayette volleyball is a fairly new program coming off a difficult 0-12 season, but the Bulldogs do have the advantage of returning all eight of their players.

The Bulldogs are under the leadership of Chase Lewis, who is starting his first year as the volleyball coach. Despite their struggles last year, Lewis is confident in his team’s ability to compete on the court.

“We didn’t graduate anybody, but our numbers are still low,” Lewis said. “We have some girls who have been doing a good job.”

The team has spent the summer practicing and hitting the weight room.

Lewis, who is the boys basketball coach as well, embraced the challenge of coaching the volleyball team.

“I was excited to step into the role because of the love I have for the program here,” Lewis said. “I want all our programs to do well whether it’s volleyball, basketball, table tennis or whatever it is. I jumped up because I love volleyball, and I know we have some talented girls.”

One thing Lewis likes about his squad this year is their competitive spirit.

“They have a little bit of a competitive edge,” Lewis said. “Win, lose or draw, we want to go out there and give it our best. If it works out, we’ll celebrate but get ourselves focused for the next game. If it doesn’t work, we’ll go back in the gym.”

The team only has eight players, which includes two seniors. They also won’t have a junior varsity team. For the summer, Lewis is just focusing on the basics.

“We’re just focusing on basic skills,” Lewis said. “We did a lot of basic skill work without even having the net up. We’re working on our form and getting in the weight room.”

While other schools have outsourced coaching help, Lewis is trying to find someone to come help teach his players.

“We reached out to Point and five other sources,” Lewis said. “We haven’t had any responses, but hopefully that will change in the next couple weeks. I’m working hard. I’m calling people every day. Hopefully, we can get somebody. If not, we’ll just work on our own and try our best.”

LaFayette volleyball will continue to practice until their first game in the middle of August.