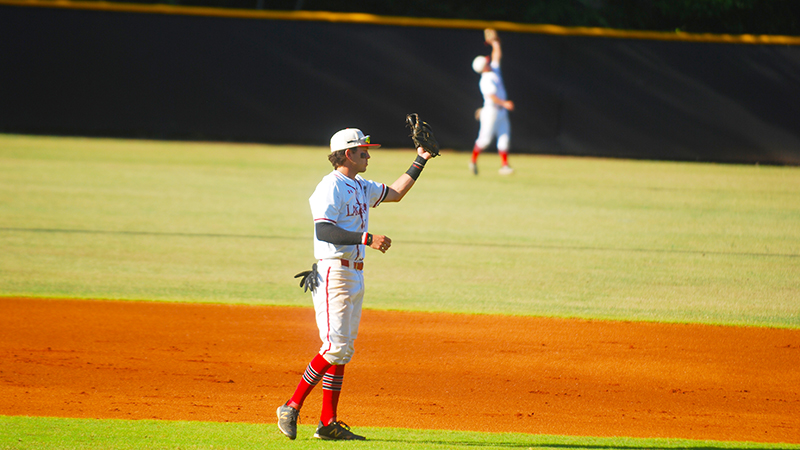 World Series bound: LaGrange College’s USA South player of the year, Joe Ruth (left) will be a key player in the Panthers World Series run. Panthers players will wear the numbers 4 and 48 on their batting helmets in memory of teammates Jacob Brown and Stephen Bartolotta who were killed in a vehicle accident on May 14. Photo by Ethan Strang.

The LaGrange College baseball team is gearing up for the first World Series in the team’s history. The no. 4 ranked Panthers will take on the no. 15 ranked Trinity (Tx.) Tigers. In the first game of a double-elimination, the loser of this game will have a chance at redemption in the next round of the tournament.

LaGrange College is led by its formidable offense that has combined to hit .346 with a .444 on-base percentage over the season. Joe Ruth, a junior, leads the team with 101 hits and is only the third player in the history of DIII baseball to eclipse 100 hits on the season. Ruth also led the team in stolen bases with nine and provided a quality defensive glove at third base. The USA South Conference player of the year leads the team with a .443 batting average, 10 home runs and 82 RBIs this year.

Cael Chatham is another weapon for the Panthers as he has hit .381 with five home runs and 56 RBIs. The junior infielder has been reliable defensively and on the mound, as well as he has come in for relief in four of the Panthers past seven games and only allowed one earned run on three hits over that span.

Jack Layrisson, a senior, has been another key piece for the Panthers at the plate. Layrisson is riding a five-game hitting streak in the most difficult part of the season and has hit .368 with five home runs and 64 RBI overall on the year. His leadership and experience in the heart of the lineup will be pivotal for the Panthers in their quest to capture the program’s first national title.

Baley Coleman led the pitching staff, who has pitched the most innings (88) for the Panthers on the season. He leads the team with 10 wins and his ERA of 3.68 is the lowest on the team among any pitcher who has started a game this season. The junior is the leader on the pitching staff and despite not having his best stuff in a game one win over Chapman in the Super Regionals, he will likely get called on to start in game one of the World Series.

The team’s no. 2 starter is Dalton Brooks, a sophomore from right up the road in Newnan. Brooks is 6-1 with a 4.55 on the season and is the only Panther to throw a complete game this season. Brooks and Coleman are the only two active LaGrange College pitchers that have started more than five games this season.

Ethan Fry will likely be the team’s number three starter despite only having five starts on the year. Despite not starting a game since March 6, Fry pitched the two straight game three close out wins in the Regional and Super Regional round of the playoffs. Still just a sophomore, Fry has been erratic across his appearances this season, but was absolutely stellar in his seven and 1/3rd innings pitched in the winner take all game three of the Super Regionals against Chapman. Fry only allowed two runs on three hits with six strikeouts as he controlled the no. 17 ranked team in the country.

Tanner Chafin, a senior, is the team’s most essential reliever. He has pitched in all the Regional games and two of the three Super Regional games.The submarine arm righty will likely be the first name called upon to enter the game out of the bullpen.

The Tigers are also a formidable offensive team, but they are built around power instead of precision. The Panthers have hit just 37 home runs to the Tigers 66 on the season. Trinity actually hit the eighth most home runs by a team in Division III baseball. No Tiger is a more formidable power source from the plate than Brian Schaub, a junior, who is tied for 10th with 16 home runs. Schaub also leads the team with a .527 on base percentage and 61 RBIs.

The Tigers are hitting .339 while LaGrange College has hit for .346 on the season.

The Panthers will either see Joseph Chavana or Samuel Conte start on the mound for the Tigers. Chavana has started eight games in 18 appearances and has accumulated a record of 10-1 and an ERA of 4.11. Conte (4-3) has started 12 games in 14 appearances and as an ERA or 4.29. Pitching has been the biggest Achilles heel for the Tigers this season as they have no pitcher with an ERA under 4.00 that has pitched more than five innings. The team cumulative ERA is 6.06 to 4.55 for the Panthers.

Trinity is making its third Division III World Series appearance and in the NCAA tournament for the 14th time. The Tigers won the 2016 national title.

Regardless of the outcome in game one, LaGrange College will be the second game. With a win in round one, they will be safe, but if they lose in round one the following round will be an elimination game. LaGrange College will open with its first game on June 3 versus Trinity (Tx.). The Panthers will either play Easter Connecticut State or Baldwin Wallace in game two.

Results of Friday’s game was not available at press time.