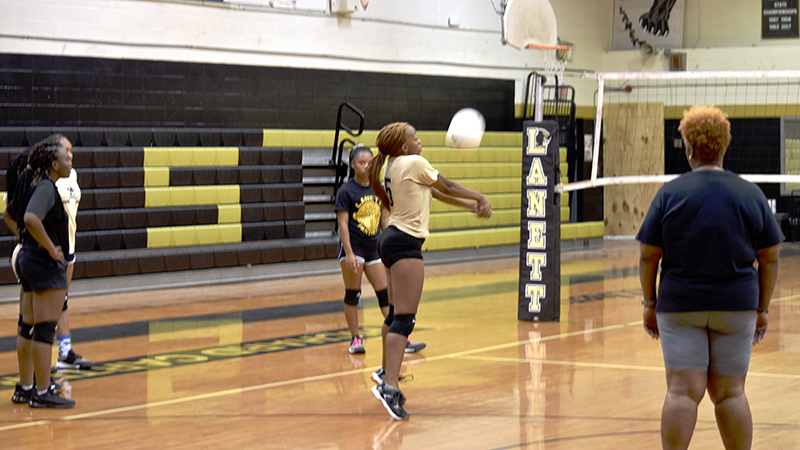 Setting up for a new season: The Lanett Panthers Volleyball team is hard at work preparing for the upcoming season. Sixth year coach Krisse Story says the focus right now is conditioning and technique. The Panthers finished the 2022 campaign 9-8 and look to build on that this coming season. Photo by Noah Patheja.

Lanett’s varsity volleyball team is looking for its first-ever area championship after coming off of an area runner-up finish last year. Krisse Story is entering her sixth year as head coach in the program’s seventh season.

“Our goal for this year is to win our area,” Story said. “We’ve never won our area. In the past, we’ve had some really great players, but it’s such a new sport to the area. Volleyball is one of those sports that you have to play as a kid if you really want to understand it.”

Even with the program being new, Story has high expectations for her team.

“Anything less than an area championship for us means we had an incomplete season to me,” Story said. “We didn’t finish. We started out so strong, but we have to learn how to finish.”

Story mentioned that she wants her players to go to camps and work on volleyball outside of school practices.

As for the summer, the team will keep practicing throughout June and most of July. Story mentioned a couple things she wants to work on over the summer.

Story also mentioned technique as an area of focus.

“We’re working on the fundamentals of volleyball,” Story said. “We’re going back to the basics.”

As for this year’s team, Story knows senior leadership will be important.

“We have a couple of seniors who I’m expecting some great things from,” Story said. “Our success basically rides on the shoulders of the contributions of our seniors. We do have some juniors who are phenomenal players.”

Story doesn’t come from a volleyball background, so she’s still learning the details of the sport along with her players.

“I’m learning on the fly. I’m building this plane in the air with volleyball,” Story said. “I played basketball in high school and college, so I really knew nothing about volleyball.”

Lanett even brought in someone from Point University to help the players learn.

“Coach Story is my husband,” Story said. “I always say I was voluntold to be the coach.”

Lanett will begin fall practice in August and will play their first game in the middle of August.