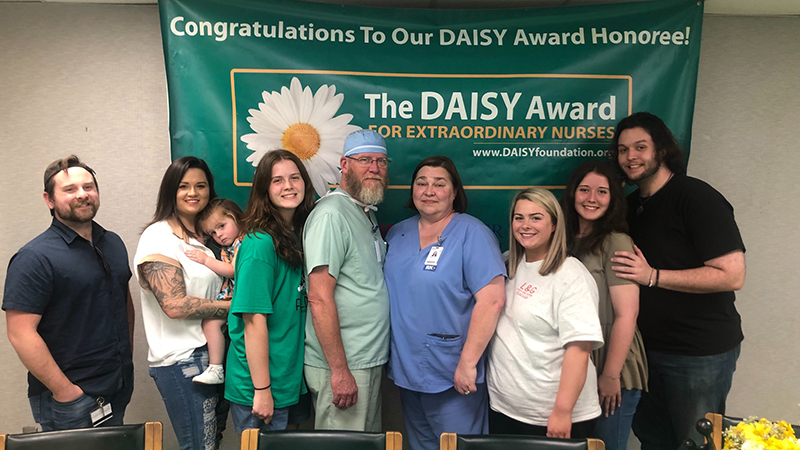 Melanie Mooney, a registered nurse with a bachelor of science degree in nursing, is known at EAMC-Lanier Hospital for being a hard worker, a good communicator, caring, honest, competitive and compassionate. After being nominated by her staff, Mooney recently received the DAISY Leadership Award for her outstanding leadership.

Mooney said she was very surprised to win the award.

“I was brought to the classroom and everyone was there,” she said. “They just surprised me with the reception and the award.”

Mooney oversees the day-to-day operations for her hospital’s emergency department, nursing administration, medical-surgical department and cardiac rehab department. Her job can be quite stressful and require her to work a lot of hours.

Despite its challenges, Mooney said she loves her job. Her favorite thing about it is taking care of the people who work for her.

“I like to see everybody get what they deserve,” she said.

What keeps Mooney motivated to be such an excellent worker is that she loves her job and the hospital where she works.

“This hospital is a great asset to the community, and I want to see it succeed,” she said.

Mooney doesn’t currently have career goals, as she feels she’s where she needs to be.

She said the DAISY Leadership Award has been given out only three times for the EAMC organization and that she was the third recipient.

Mooney has been working for EAMC-Lanier for 14 years. She started out working on the medical-surgical floor. She has also worked in the ICU and emergency room, and she’s been the house supervisor for the hospital.

According to The DAISY Foundation, The DAISY Award was created in memory of Patrick Barnes, who succumbed to complications caused by the auto-immune disease Idiopathic Thrombocytopenic Purpura. In late 1999, at the age of 33, he woke up with blood blisters in his mouth. After visiting a doctor, he learned that he had a dangerously low platelet count and was admitted to a hospital.

Barnes’ wife, Tena, came up with the acronym, DAISY, which stands for Diseases Attacking the Immune System. Barnes’ stepmother, Bonnie, Tena and his father, Mark Barnes, then established their 501(c)3 not-for-profit organization. As the three discussed what to do in Patrick Barnes’ memory, they agreed that they should thank nurses for the care they give to patients and their families. The DAISY Foundation now honors nurses internationally.