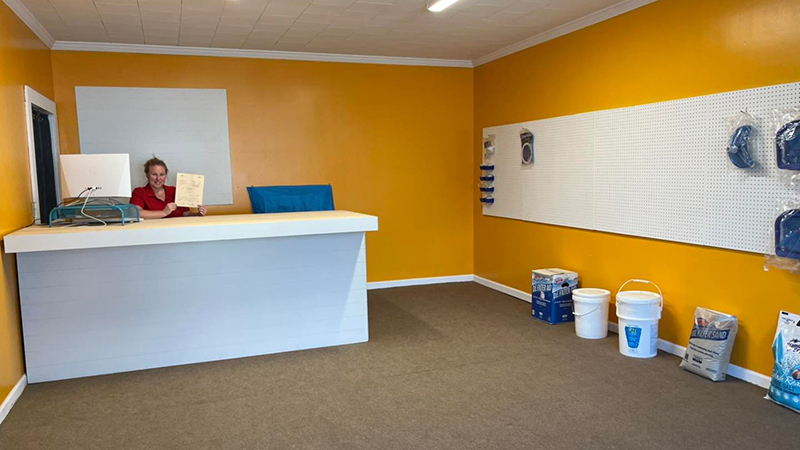 EverKlear Reflections Pools Service is not a new business, but owners Michael and Asheley Cook recently opened a new physical store for it at 4405 20th Avenue in Valley. Michael said the store’s grand opening will happen on June 25, which happens to be the Cooks’ six-year wedding anniversary.

The store will sell chemicals and other pool products. The business will continue to provide pool maintenance services.

“Pretty much anything to do with a pool, we can get,” Michael said. “We do a lot of motor replacements. Sand jobs. A lot of people have issues with their sand filters. You have to swap the sand out every four or five years.”

The Cooks are willing to travel up to 30 miles to service people’s pools.

“We actually do Opelika, Auburn, all the way to Phenix City and Columbus,” Michael said.

The new location has a sitting room with a porch swing where customers can wait. Cook said he and his wife plan to add plants for ambience.

EverKlear Reflections has a referral program. If it services a customer’s pool monthly and that customer refers it to service a new person’s pool, the customer will get a discount of $20 a month off their bill. Michael said he and his wife would decide how long the discount would last. He said it would probably last about a year.

Michael said that what makes EverKlear Reflections stand out among other pool businesses is that it’s family-owned and that he and his wife take pride in their work. He said it gets great reviews. He said EverKlear Reflections can do almost anything having to do with a pool besides installing an in-ground pool, which they don’t have a license for.

The best way for people to contact EverKlear Reflections is by calling (334) 820-0841. The Cooks are in the process of creating a website. The business can also be reached by emailing ​​everklear.reflections@gmail.com.

EverKlear Reflections is not the Cooks’ first business.

“We actually owned the 500 Fitness down in the valley for a couple of years,” Michael said.

Cook said he and his wife took the gym from having about 50 members to about 250.

Churches team up to deliver free meals to families