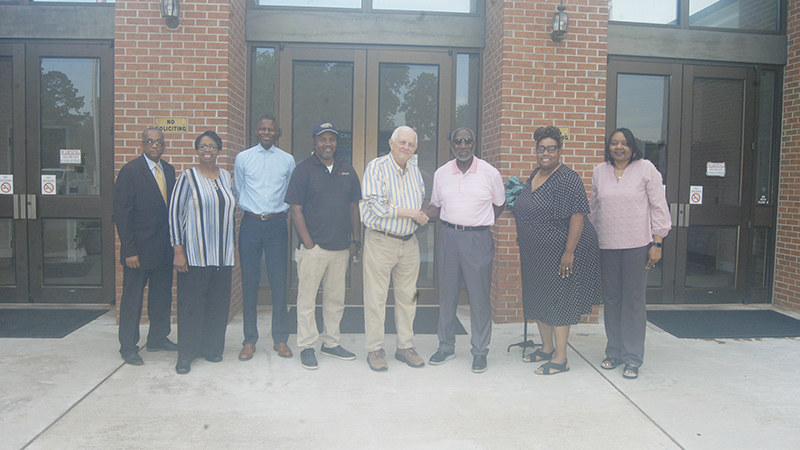 LANETT —  The City of Lanett is looking for a new council member. The District 3 seat became vacant Wednesday evening when Charles Looser submitted his resignation.

“I want everyone to know that this is not because of anyone who is here or has been here,” Looser said at Monday’s called council meeting. “My son and his family have moved to Auburn, and a place is available that’s real close to them. I’m 75 and am not getting any younger. I am going to relocate to be closer to my family.”

Looser and wife, Vickie Looser, were long-time educators in the Lanett City School System. Looser was in public education for 30 years before retiring several years ago. He started out with the Chambers County System at Five Points High and later transferred to Valley Junior High before coming to Lanett, where he was a science teacher at Lanett High before becoming an administrator. He was the LHS principal for two years before serving as the city superintendent for seven years.

“I was a classroom teacher for 20 years,” he said. “I lost my wife several years ago, and my sister recently died. I have ridden in the back of an ambulance four times. That’s been a wake-up call for me. It’s time for me to make the move to be closer to my son and my grandchildren.”

Looser said he is enjoying his retirement but is missing the people he has worked with over the years. “I have had a good ride here in Lanett, and I want to thank everyone for supporting me over the years,” he said.

Members of the council took turns thanking Looser on having served major roles with Lanett schools and in city government.

Mayor Jamie Heard said he had enjoyed working with him both with the school system and with the council.

Looser said that when he was principal or superintendent he never had to get on the phone to call the police department for help but that it was reassuring to know they were there if any assistance was needed.

“We always got great support from them,” he said. “The guys in the fire department and Lanett EMS were great friends for the schools, too.”

Council members Tony Malone, Tamalita Autry, Angelia Thomas and Tifton Dobbs each thanked Looser for his service to the city schools and the council.

“We hate to see you go,” Thomas said. “We have worked together through the good, the bad, and the ugly. You have been an asset for our city.”

In naming a successor, the city council will likely use the same procedure employed when current Council Member Tamalita Autry was named to fill the balance of Jamie Heard’s term when he moved up to the mayor’s office to succeed Kyle McCoy. City Attorney Stanley Gray reviewed the legal procedures for filling an empty seat.

Registered voters who live in District 3 can submit a resume at city hall, phone city hall to express their interest in the position or come by city hall and talk to the mayor about being considered. Eligible residents of District 3 who want to be considered for the council seat will be interviewed by council members, and they will vote for one of the candidates under consideration. By state law, the council has 60 days to fill the position in this manner. If the seat hasn’t been filled in 60 days, the governor can appoint someone who lives in the district or a special election can be called.