Many brave heat to celebrate Juneteenth in Lanett 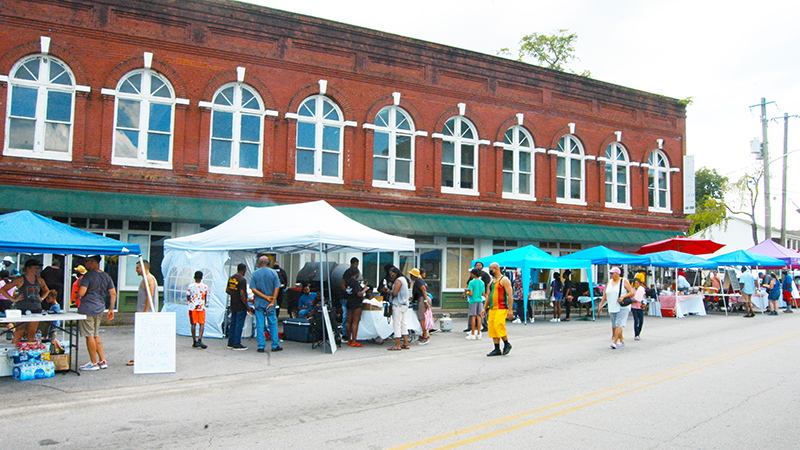 Braving the heat: A crowd gathered to enjoy fellowship and fun during the Greater Valley Juneteenth festival in Lanett on Saturday. Photo by Wayne Clark.

On Saturday, a large group of people braved the afternoon heat to enjoy the Greater Valley Juneteenth Festival in downtown Lanett. All around were various vendors, representatives from non-profit organizations and inflatables.

Visitors Cathy Dunlap and her husband, Dr. Nathaniel Dunlap, both of Opelika, each had their own expectations for the event.

“This is actually my second time attending a Juneteenth event, and I’m just looking for education because I think I heard there’s supposed to be some kind of program where they tell about the history of Juneteenth and the purpose,” Cathy said.

“As one of the senior administrators at Point University, I’m hoping to strengthen the relationship between Point and the City of Lanett,” Nathaniel said. “I’m just going to be enjoying all of the fellowship and the fun and getting to meet some of the neighbors and some of the businesses that are here.”

Shar Barnes said she was present to support the community and sell some engraved items, key chains and other things.

“I am her moral support. I am her mother,” Chandra Lynch said about Barnes. “I’m just here to pick up wherever she needs me to.”

“[Juneteenth] is when we became free officially, so it means freedom, it means a new life, it means happiness,” Barnes said.

The ​​emcee at the festival was Cameron Reed, who established the Reed Foundation. Reed is an alumni of Lanett High School and is currently the equipment administrative assistant for the Chicago Bears. Reed introduced Rev. Kelsey Barnes of Goodsell United Methodist Church, who gave an overview of the history of Juneteenth.

“We celebrate Juneteenth because we celebrate the end of Africans who were brought to this country, this land, and enslaved,” Rev. Barnes said. “It is the oldest nationally celebrated commemoration of the ending of slavery.”

Barnes brought up the Civil War and the Emancipation Proclamation, which President Abraham Lincoln issued to free slaves in the rebel states. It took time, however, for freed slaves to learn that they were free, he said.

“It was in 1865 General Gordon Granger of the United States Army that rode into Galveston, Texas to inform, to teach and to educate the formerly enslaved Africans of their new freedom,” he said. “I want to drive that point home that we must first educate before we celebrate, because that’s what it was all about. They were already free by paperwork. They were free by the hand of man, but they did not know.”

At the conclusion of the event, attendees were treated to a fireworks show.