Memorial art show shaping up to be one of the largest 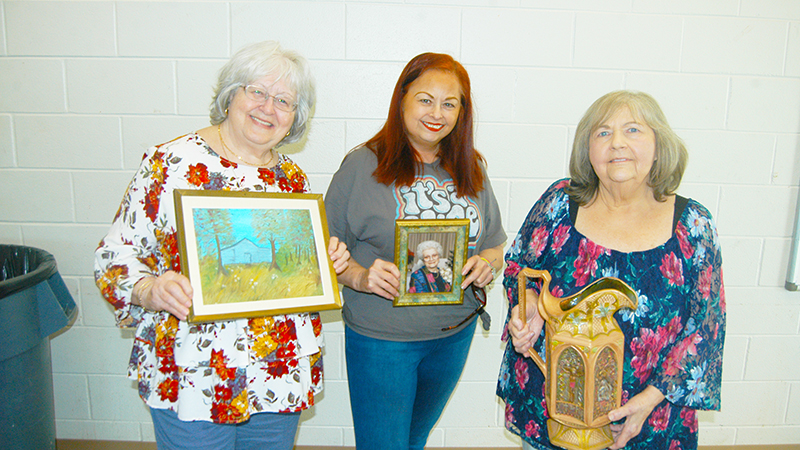 Preparing for the show: Valley Arts Council President Suzie Britt (at center) is displaying a picture of one of the artists whose works will be displayed in the inaugural Memorial Art Show. The artist’s daughter, Mary Bain (at left), is showing one of her mother’s paintings. Martha Cato (at right) displays a ceramic item made by her mother in the 1960s. Photo by Wayne Clark.

VALLEY — Valley Arts Council’s first-ever Memorial Art Show could have the most entries and receive the most visitations of any show it has ever hosted. The show will take place in Valley Community Center’s Community Room on the weekend of June 11 and 12. On display will be the artworks of people from the local area who are no longer living but whose creations remain treasured by family members and appreciated by anyone who loves art.

The displayed artworks will include everything from drawing and painting to sculpture, photography, ceramics, quilting, knitting and crocheting.

One exhibit will show the works of Lura Agnes Chase McClain (1922- 2013). A native of Lee County, Chase spent most of her life in Chambers County. According to family members, she had no formal education. Chase is self-taught, creative, artistic, talented and could master any form of needlepoint or stitching.

“She could see a picture of a dress in a catalog or magazine and make one just like it without a pattern being used,” said her daughter. “She could look at something like a picture or a vase and make a duplicate of it. She loved to crochet Christmas tree ornaments, doilies and bedspreads. My mother was a sweet, caring, loving, friendly and a hard-working Christian woman.”

Another exhibit will show the ceramic work of Nell Smith Cato, mother of former Valley City Clerk Martha Cato. “She and my dad, Bill Cato, bought out Groover Ceramics in the Valley in the early 1960s,” Martha Cato said. “They taught ceramics classes for over ten years with classes being held during the day and three nights a week.”

Mrs. Cato exhibited in art shows in Opelika, Montgomery and Birmingham. Her students and family members would enter ceramic items as well.

“They would always come home with many first place and second place ribbons,” Martha said. “She was always interested in learning new techniques and using new stains and glazes. She was always encouraging her students to be creative. She would sometimes bring in professional artists sponsored by paint companies to come in to teach classes.”

Mrs. Cato was always looking for new molds to make ceramic items. “She had over 10,000 of them when the business closed,” Martha said. “Her students would pick out their own pieces, and each person would be doing different techniques. As they sat around a table, she would help them individually with what they were painting. She was always trying new things. I can remember her taking clay and molding roses. She also loved airbrushing ceramic pieces and using 14 karat gold on her ceramic pieces.”

A booth at the upcoming show will feature the works of Miss Verna Tatum (1907-2003). A Chambers County native, Tatum graduated from Chambers County High School in Milltown and attended college at Jacksonville State and Auburn. She taught school in Fredonia from 1933 to 1936 and in Shawmut from 1936 until she retired after more than 40 years as an educator. She lived in the Shawmut teachers’ dormitory, located directly behind the two-story brick building on Shawmut Circle.

Miss Verna came from a family of educators. Her sister Lillie taught school and played piano at the Methodist church in Milltown for more than 60 years. Her brother Lucius Tatum had a daughter and son-in-law who taught in the Lanett City School System for years. Another sister, Ruth Tatum McClendon, was educated as a teacher.

Verna was a long-time member of the Little Boston Club and the Milltown Methodist Church.

Some of the much-acclaimed photography of Marvin Rhodes will be on display. Rhodes was a native of Atlanta and a veteran of the Vietnam War. He gained fame for his photographs and interviews of fellow Vietnam veterans. He died of brain cancer while still a young man. The illness was possibly caused by exposure to agent orange while in Vietnam. When he passed away, Rhodes and his wife Susan lived in the Shawmut community.

Rhodes is best known for “Testify!” a book containing photographs and interviews with fellow Vietnam vets. Those featured in his work include well-known people such as General William Westmoreland, former baseball star Champ Summers and radio personality Gary McKee.

“Like every Vietnam veteran, I’ve taken my lumps,” Westmoreland (1914-2005) is quoted as saying, “but I have not lost sleep over it because I know the attitude of the American people will change with time, and the Vietnam veteran will have to ride it out.”

Each person interviewed for the book is asked three questions: “What comes to mind when you think of Vietnam?” “How did the war affect you?” and a “What has life been like since your returned?”

Max Cleland was another well-known person who interviewed for the book. Cleland (1942-2021) was disabled in Vietnam and later served as Georgia’s secretary of state and as a U.S. senator.

When asked what came to mind when he thought of Vietnam, Cleland said, “not wanting to go back.”  When asked how the war had affected him, he said, “It changed me physically, emotionally and mentally. It exposed me to great physical pain. It challenged me to look closer at my government and do something to keep us from going out so far on a limb politically, to keep from losing so many young men in the future.”

Emerson Knight, who was 36 when the book was published in 1985, said the Vietnam experience had shattered him. “I don’t have a life now,” he said. “I’m a drunk. I’m a little bit of everything. People are scared of me. If tomorrow comes, it comes. If it don’t, it don’t. I’m not going to lose any sleep over it.”

Rhodes went to Vietnam in 1969. When the time came to leave, his mother drove him to the airport. “She and I both cried on the way there,” he wrote. “We knew we wouldn’t be seeing each other again. Three hundred men were dying every week in Vietnam. It was hard to be optimistic.”

When Rhodes returned home, no parades and bands were playing for the returning veterans. “My book is not a ticker-tape parade down Broadway,” he wrote. “It’s my little parade. It’s my way of saying to these men — and to myself — ‘Welcome home!’”