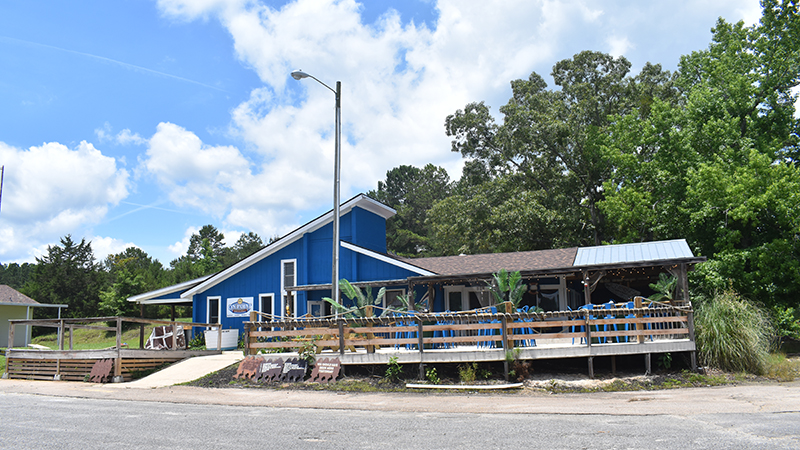 On point: A new restaurant has opened for business at Southern Harbor Resort Marina in Lanett, aptly named On Point Bar & Grill. Photo by Cole Trahan.

A new restaurant, On Point Bar & Grill, has opened at Southern Harbor Resort Marina in Lanett. Located at 1135 County Road 294, it opened on May 12 of this year. When you approach it, the first things you’ll probably notice are the dark blue paint and outdoor eating area with plants and other decor. Look to the right, and you’ll see a lake, many boats and a lighthouse in the distance.

The restaurant’s owner, Randy Brady, said it mainly serves seafood, burgers, wings and other bar food. He said that the “Randy’s marina roll,” a hoagie sandwich that he created, is a big hit.

“Pretty much every table, somebody’s ordering it,” he said. “So, it’s crawfish, shrimp, crabmeat, chorizo with On Point seasoning on top and sauce.”

“So for the tacos, they get a choice,” Norfleet said. “They can do shrimp, chicken, crawfish…”

As for drinks, Norfleet said the restaurant has Coca-Cola products and coffee. It is working on getting a liquor permit so it can sell alcoholic beverages.

Phillip Montano, a customer and weekend employee, said his family has lived near the marina for 12 years.

“It used to be another restaurant, but this is the nicest it’s ever been,” Montano said. “It’s coming together. It’s a place where people are starting to come to. It’s a good atmosphere, good service, good hospitality, just good food, for real. I’m ordering some food right now.”

Compared to previous restaurants at the same location, Montano said On Point Bar & Grill makes food faster, the management is better and it has a better environment.

“You come in here, and you’ve got that lake,” he said. “Feeling that lake vibe. It’s just something for everybody who lives around West Point Lake. It’s just a nice place to come to.”

Montano has two favorite dishes at the restaurant — Cajun chicken alfredo and cheeseburgers.

Randy expects On Point Bar & Grill to thrive by giving customers a “five-star” experience with hot food and cold drinks. He said people come to the lake to get away, so he wants to give them a place to relax.

“I want an all-around laid-back experience,” Randy said. “When you go to Florida and you’re at the beach, you’re hanging out… when you go to the restaurants, they keep that vacation vibe going. You don’t go in and it’s, like, dead … They keep it going. And that’s what I want here.”

He said business has been great so far.

“Everybody raves over the food,” he said. “They rave over the service. We’ve got a good-looking crew here that are nice to people. They’re outgoing. They’re having fun. They’re also trained to bring an experience to people.”

The only thing people have complained about, Randy said, are the chairs, which are tall and blue.

“Other than that, seriously, everybody loves it,” he said.

Randy said it took about three months to set up the new restaurant. The work started in February.

“We bought all new equipment,” he said. “Of course, all new chair, tables … I’ve got some picnic tables out there for the older folks or someone who doesn’t want to sit in a high chair.”

Randy said a lot of customers sit outside around the corner to have a view of the lake. Some people order food and take it out on their boats.

Interestingly, On Point Bar & Grill is not just a restaurant. In another room of the same building is a souvenir shop. Inside it are various wakeboards, surfboards, t-shirts and other items. The business also has cornhole boards and an outdoor bar.

“We’re going to have a raw bar,” Randy said. “Oysters being shucked the entire day right in front of everybody. Right here on the ice.”

Randy chose the colors for his restaurant carefully. The ones that stand out inside are white and blue. Outside are several green plants.

“You know, colors have energy,” he said. “So you want happy colors. You want relaxing colors and energetic colors.”

He explained how he came up with the name “On Point.”

“The food’s on point, and it’s on West Point. It’s on the point, kind of. It’s actually the cove,” he said. “And if you look at our logo, the compass is actually pointing to the west.”

Jessica doesn’t share ownership of the restaurant with Randy but helped set it up and continues to help with running it.

On Point Bar & Grill is not Randy’s first business. He and Jessica own five businesses — two restoration companies and a company that makes QR codes for tombstones. Randy said another On Point Bar & Grill is being set up in another location. He wasn’t comfortable sharing the location, but he said it’s coming soon.