‘Pay it forward,’ County officials urge citizens to vote ‘Yes’ for the continuation of the 6 mill ad valorem tax 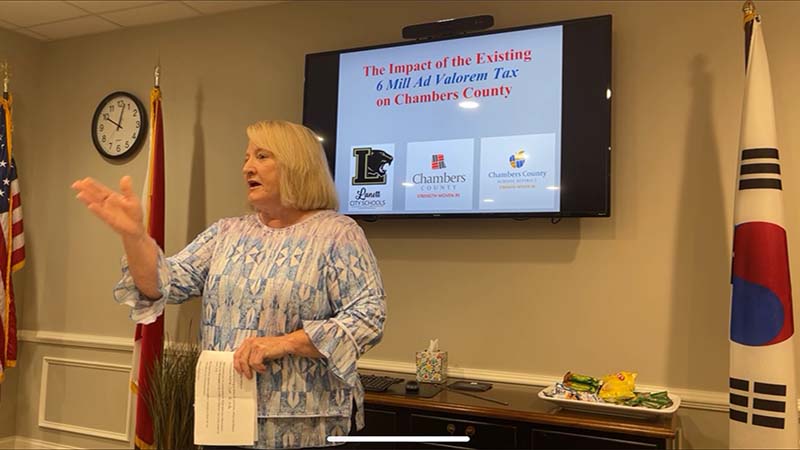 For many, the June 21 primary runoff election is about selecting between Katie Britt or Mo Brooks for Alabama’s Republican candidate for U.S. Senator.

However, in Chambers County, there will be another critical box to check, the continuation of the 6 mill ad valorem tax. Three mills of this tax go to the two school districts, and the other three mills are put toward the county’s general fund for the construction and maintenance of roads in the county. On the ballot, a measure will appear that reads:

McCoy began the presentation with some history of the six mill tax and how it was received in 2003.

“Back in 2003, things in Chambers County [were] pretty difficult. The textile industry had died. The unemployment rate was at double digits. The county and city school systems both were in need of funding for programs and facilities, and the Chambers County road system was in dire straits for maintenance and construction,” McCoy said. “So, back in early 2003, the Chambers County Commission, we met and we discussed the problems that were facing Chambers County. And we looked at possible resolutions to address these problems. It quickly became apparent that the only way that the children and the people of Chambers County could be afforded what they deserve and what they needed was that [an] additional revenue measure had to be considered.”

On March 10, 2003, McCoy said the commission passed a resolution that allowed the people of Chambers County to vote to impose a six mill ad valorem tax, and in November 2003, 3,843 voters passed the ad valorem tax with 58% saying yes.

In his closing statement, McCoy implored the voters of Chambers County to vote yes on this measure.

“On June 21, we’ll have the opportunity to do the same thing that our parents did and our grandparents did when they voted back in 2003,” he said. “Let us be clear, crystal clear. This is no new revenue measure. This is no new tax. This is just exactly what we’ve been doing for the last 20 years. So, the opportunity is dire again that people will have to speak. We will have to say, do we want a better quality of life for our kids and our grandkids? It’s called pay it forward. We want to give them those opportunities that our parents and grandparents gave us.”

Both Boyd and Chambley began their presentation by saying the loss of these funds would be “devastating” to the schools.

The rise of material costs is something both Chambley and Harvill say makes the need for this ad valorem tax that much more of a necessity.

Of course, with consolidation on the horizon and the need to build a new school as well as make improvements on current buildings, the district will likely need to draw from local funds.

For example, Chambley said to renovate a 50,000-square-foot area on the LaFayette High School campus that will house a K-8 STEM magnet school will cost approximately $15 million.

Harvill also spoke to the age of the county’s infrastructure and its need for repair.

“Our infrastructure was really built in about a 20-year window there from the 50s to the 60s,” he said. “So, our infrastructure is aging, and as that surface deteriorates, what’s more costly, more time-consuming to us is what has happened to the drainage underneath.”

Harvill says the county’s transportation plan would be in jeopardy without the tax.

In Alabama, property tax is based on property classification, millage rates and exemptions. A mill is equal to one-tenth of one cent (.001), so six mills equals $0.006. As an example, a single family home w/ garage on ½ acre in Valley with an appraised value of $124,460, the assessed value of that home is $12,440. Breaking that down even further, that is $6.22 per month. That results in an ad valorem tax cost of $74.64 per year for the property owner.

Unlike in previous years, any registered voter in Alabama can vote on this measure, even those that do not own property.