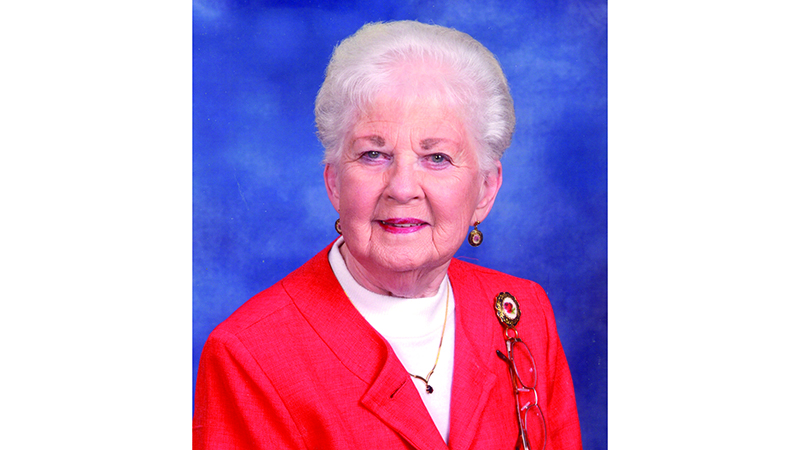 Peggy Ann Fair Etherton Miner, 95, died peacefully on June 20, 2022, at St. Vincent’s Hospital in Birmingham. Peggy was born March 24, 1927, to the late Walter and Ruby (Montgomery) Fair. After the untimely death of her parents at age 10, Peggy went to live with her grandmother, Nannie.

Peggy was primarily raised by her Uncle John and Aunty B (John and Mamie Beatrice Stone). She grew up in the Pinson community and graduated from Phillips High School and Snead Junior College in Boaz, Alabama where she met Acie Etherton.

They were married on December 7, 1945, the same day they graduated. Acie was an ordained minister. As the wife of a Methodist minister, Peggy called many places home over the years. Some of the places she resided included Florence, Belle Mina, Moulton, Hokes Bluff, Langdale, Oxford, Guntersville and Scottsboro. While in Florence, Peggy completed her education at Florence State Teachers College (now University of North Alabama).

After her husband’s passing in 1969, Peggy moved to the Birmingham area where she worked as the administrative assistant to the Sears and Roebuck store manager until she retired for the first time. She was very active at McCoy United Methodist Church. It was through McCoy that she met Joe Miner. They were married in 1971. They remained at McCoy until it was closed in 1993. They then became members of Trinity United Methodist Church where Peggy served as the director of senior activities for many years until her second retirement. She was a member of the Friendship Sunday School Class in addition to serving on a variety of committees over the years.

Peggy enjoyed worshiping the Lord, traveling with family and friends and watching Alabama football. She enjoyed lifelong friendships with her church family and loved spending time with her grandchildren. Later in life, Peggy’s body was not up to the physical demands of travel, but she was still mentally sharp and felt joy and contentment with the many blessings in her life.

Peggy was a lady of grace and beauty, and her faith was evident to others by the life she lived. She dealt with even the toughest situations with such strength and dignity. She would always give the most honest and Godly words of encouragement and advice. Her heart was full of love, mercy, compassion and understanding. As family and friends are left to navigate this life without her, these precious qualities of hers will remain with us and will guide, inspire, challenge and lift us up.

She was preceded in death by her first husband, Acie Etherton; second husband, Joseph Miner; eldest son, W.L. “Bucky” Etherton; special cousin, Helen Hopewell and special friend, Ken Moore. A special thanks to Maple Fikes who provided great care and comfort for her in her late stages of life.

There will be a memorial service at the Mouat Chapel at Trinity United Methodist Church, located at 1400 Oxmoor Road, Birmingham, Alabama 35209 at 3 p.m. CDT on Sunday, July 3, 2022, with Pastor Reid Crotty officiating. Visitation will be held from 2:30 p.m. until 3 p.m. at the chapel prior to the service. Flowers are welcome, or memorial donations may be sent in her name to Trinity United Methodist Church.

Fond memories and expressions of sympathy may be shared at www.ridoutsvalleychapel.com for the Miner family.