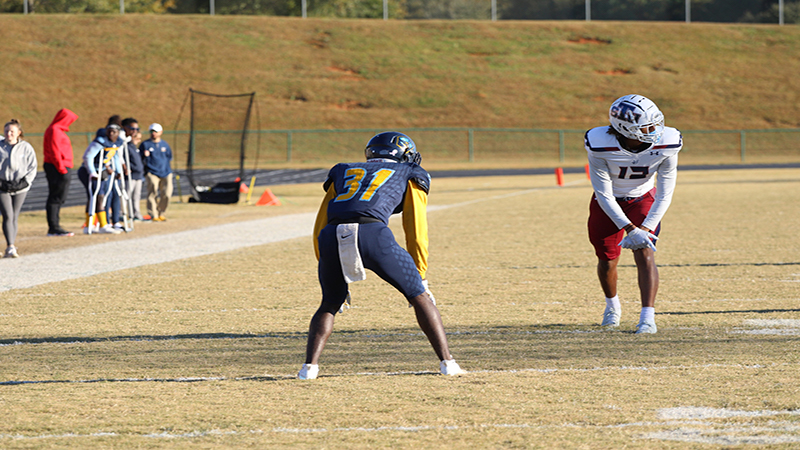 Point football is looking for a fresh start under Head Coach Trevor Zeiders after coming off of a 2-9 season. The Skyhawks are entering their 11th season as a program and have yet to post a winning season.

Zeiders has been a coordinator for the Skyhawks for the last two years, but now he’s taking over as head coach after Julius Dixon’s departure.

Even with Point’s struggles, Zeiders knows what he needs to do to turn the program around.

“We have to be more disciplined in what we do,” Zeiders said. “Guys have to be accountable to get an education and play football. That was evident quickly going from a 1.89 team GPA to a 2.44 team GPA at the end of the Spring.”

As for on-field performance, Zeiders knows the offense needs to improve.

“We need to utilize our skill guys better,” Zeiders said. “We have a young man named Emery Bryant who we’re very excited about. He can be a difference maker for us. The offensive line returns several guys.”

Point will run a pro-style offense as opposed to an air-raid offense last year.

One of the main challenges the players face is adjusting to the new offensive scheme Zeiders is putting in place. For the defense, there won’t be as much change due to the return of several players.

“I won’t be changing much defensively,” Zeiders said. “I want us to play fast, hard and not really have to think because defensive football is reactionary. The more new stuff you put in, the more they’re thinking.”

Luckily for the Skyhawks, they will return a majority of defensive production.

“We only lost three guys on our defense from last year,” Zeiders said. “If they can play at the level they played last year, we’ll be in good shape. They kept us in several ball games, but our offense struggled mightily.”

Point was ranked 95th out of 98 teams in the NAIA in total offense.

“If we can get into the top half of the country, we will have a much bigger turnaround than anybody realizes,” Zeiders said.

Zeiders is unsure of who will start at quarterback this year, and it will be decided in fall camp. The running back room will be a by-committee room. Emery Bryant will be the main offensive weapon for the Skyhawks.

Point won’t begin official practice until Aug. 3 due to several players being gone for the summer.