Program coordinator has big vision for The Growth Academy 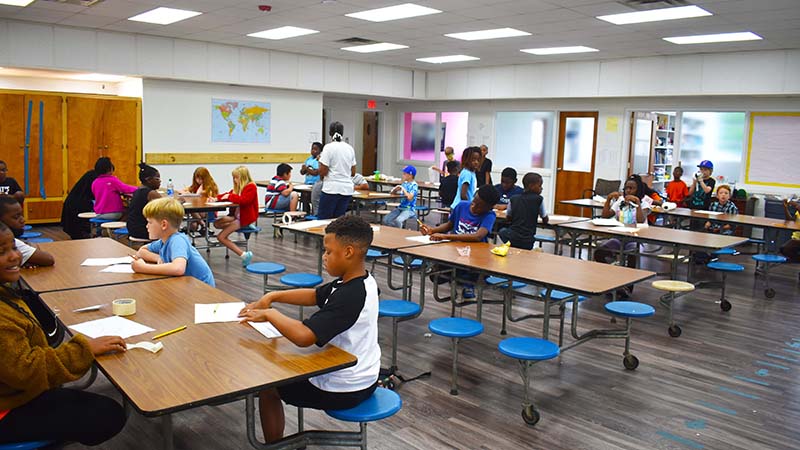 Paper-folding exercise: Kids participate in a paper-folding project. The woman in the white shirt in the center is staff member Betty Heard. Photo by Cole Trahan.

At the Chambers County School Board meeting on Tuesday, Jonathan Hurston, executive director of The Circle of Care Center for Families; Yancey Gatlin, The Growth Academy’s volunteer program coordinator and Chambers County School District Superintendent Casey Chambley spoke about The Growth Academy’s history and progress. The Growth Academy is basically a STEM lab and tutoring program for children ages six and up. It took the place of what used to be the local Boys & Girls Club. The program has a partnership with The Circle of Care, which aims to provide resources to families.

“A couple of years ago, the Boys & Girls Club essentially collapsed,” Hurston said. “And when that happened, we had people from within the community who said, ‘Hey, there’s a need for after-school programming and summer programming in which our kids will be in a safe, supervised environment,’ because otherwise parents can’t go to work or kids are left at home alone and those sorts of things. But by the same token, we wanted to improve the programming that was taking place.”

At the time, the Boys and Girls club was meeting in the basement of the Langdale gym, Hurston said. There were several issues with this such as flooding when it rained. It also wasn’t the best environment to do homework, as kids were playing games such as basketball in the same room.

A group from the local community wanted the program to be better for kids and incorporate concepts from STEAM, which stands for science, technology, engineering, arts and mathematics. The Growth Academy was born.

The Growth Academy program became offered under the Circle of Care as of spring last year.

“And we worked really hard to renovate space in the Shawmut Circle, the old research and engineering building,” Hurston said. It’s about 27,000 square feet, so there’s lots of space there. And what they’ve really been able to do with that has been phenomenal and amazing.”

“And we really, really used and leaned on them during COVID,” Chambley said. “… There are so many of our parents that don’t have after school care and that are single families. Single mothers working. Single fathers working. And they don’t get off until 4 p.m. or 5 p.m. in the afternoon after school closes.”

Chambley said he couldn’t wait for the school board members to tour The Growth Academy building.

He said he doesn’t want to tax the school system and just wants Chambers County School District to bus kids to The Growth Academy.

“Let us be a support system,” he said. “Let us catch them up, teach them life skills. Teach them how to communicate, teach them mindfulness, kindness.”

Gatlin said The Growth Academy gets a lot done with very few resources. He hopes to offer free tutoring and hopes corporate entities will sponsor the school.

In an interview, Gatlin revealed that the program has grown since last year. In July of 2021, an average of 56 children were in the building each weekday. Gatlin said 111 children are enrolled now.

Gatlin said The Growth Academy gets most of its money from the Alabama Children’s Trust Fund. It also receives money from private donations.

“Jonathan Herston and Kathy Richardson at the Circle of Care have been incredible to me in helping me guide the back end of the grants, managing the money, things of that nature,” Gatlin said. “… I talk to Jonathan [Herston] about every decision, and they handle the money. They administer grants and stuff for me. So, I really try to go over with him what’s going on.”

The Growth Academy is not free for students to attend.

“If it were free, it would be neglected,” Gatlin said. “And so, it was $40 a month for the kinds to go to the Boys & Girls Club, and that’s what happened to that. A parent’s not going to send their kids somewhere that only costs $40 a month. Most parents used that program as a babysitting service, as a daycare. I’ve tried to change that image.”

However, Gatlin said he would gladly give scholarships to parents who can’t otherwise afford to have their children in the program.

Gatlin said he wants The Growth Academy to be similar to Inspire Academy.

“I don’t think we’re at the level they’re at, obviously,” he said. “But we’re… same types of things. We’re building up hydroponics this summer, so we’ll have a hydroponic system there. Kids love to see things grow.”

Gatlin said the Chambers County Extension is going to hold a program on healthy eating at The Growth Academy.

“We encourage things like that,” he said. “I want to teach them Latin. I don’t have that program set up yet. But those are things that I’ve got in mind that I’ve been reading about.”

The Alabama Children’s Trust Fund still provides STEM Zoom classes at the center in the afternoon, as it did last year.

Tutoring at The Growth Academy can be one-to-one or even five-to-one. Gatlin wants it to be ready for parents whenever they need it.

“With my tutoring program, I want it to be a walk-in program where parents can walk in, and I’ve got people there that can sit with their kid and help them,” he said.

Gatlin doesn’t mind working for The Growth Academy for free.

“It’s been a labor of love, but I love this community,” he said.