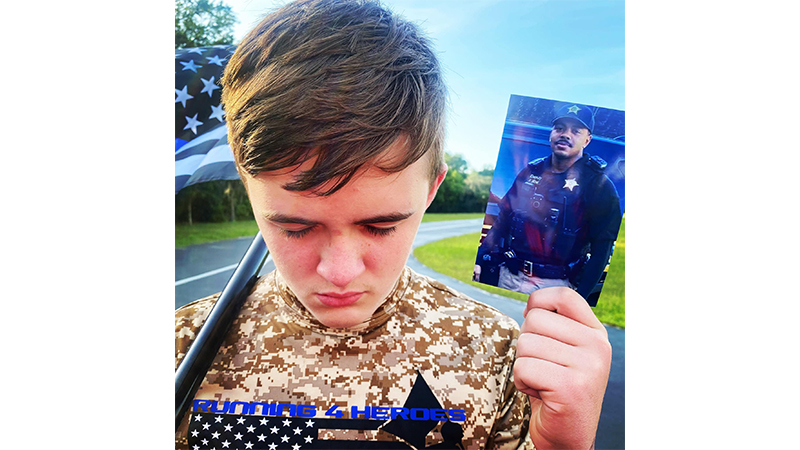 Running for a cause: Above, 13-year-old Zechariah Cartledge holds a photo of fallen Chambers County Sheriff’s Deputy J’Mar Colin Abel, who was killed in the line of duty on Monday. Cartledge runs a mile for every law enforcement officer that loses their life in the line of duty. Photo contributed.

People all around the Chambers County community were sad to learn about the recent passing of Deputy J’Mar Abel, who worked for the Chambers County Sheriff’s Department. It may come as a surprise to many that Abel was honored on Wednesday by a 13-year-old boy, Zechariah Cartledge, in Winter Springs, Florida.

At around 7 p.m. that day, Cartledge and a handful of others ran two miles back-to-back in honor of Abel and another fallen deputy, Austin Derek Aldridge of the Spartanburg County Sheriff’s Office in South Carolina. The location was the bus loop at Layer Elementary School in Winter Springs, which Cartledge had attended.

The organization in charge of the run is Running 4 Heroes, Inc., which Cartledge said he founded when he was 10. Its mission is to honor fallen heroes by running, providing financial support to injured first responders and the families of fallen ones and providing safety equipment to K9s in need.

During each mile run he participates in for a fallen first responder, Cartledge carries a flag. Afterward, his organization sends the flag along with an encouraging note to the first responder’s loved ones. Cartledge said he believes Abel’s flag has shipped and hopes it will comfort Abel’s loved ones in their time of grieving.

Cartledge said Wednesday’s run was “amazing” and that the weather was ideal. He said there were many people sitting on the sidelines to support the runners.

“We were joined by many first responders, and it was a big turnout. I’m glad it was a good turnout because it was definitely needed for this community. [Abel] was only 24 years old. He still had his whole life ahead of him, and we were really glad that the run was able to make a big impact because it was meant to be for a great person.”

Cartledge said his organization wishes Abel’s loved ones “as much support as possible.”

Cartledge has had a passion for running since he was five years old, according to https://running4heroes.org. He began participating in 5k events in his community when he was seven.

A turning point in his life happened in October 2017 when he ran in the Tunnel to Towers 5k in Orlando, Florida. During that run, he ran with dozens of first responders, many of which were dressed in their full gear. Cartledge enjoyed this so much that he wanted keep running with and for first responders.

Originally, he set out to honor a fallen 9/11 police officer, Walwyn Stuart, while raising money for the Tunnel to Towers Foundation. He spent 2018 raising over $11,000 for the foundation by running in various races in honor of Stuart.

At the end of 2018, Cartledge learned that the number of police officers who had died in the line of duty that year was nearly equal to the number of miles he had run. He decided to run a mile for every one of these officers in 2018 and raise $100 for each of them for the Tunnel to Towers Foundation.

Two weeks into 2019, he learned that even more officers had lost their lives that year. He decided to run a mile for each of them, carrying a blue line flag in their honor.

Cartledge said his organization has grown ever since its founding. It currently has 17 board members. He said the organization’s followers also play an important role in its success.

His organization learns about fallen first responders from Officer Down Memorial Page at https://www.odmp.org, he said.

Cartledge said that since January 2020, his organization has raised over $277,000 for 33 injured first responders.

“We also raise money for families of fallen first responders,” he said. “Since January of this year, alone, we have raised over $200,000 for them. And that’s strictly through donations.”

Each month, Running 4 Heroes also donates a minimum of $10,000 to a first responder injured in the line of duty.