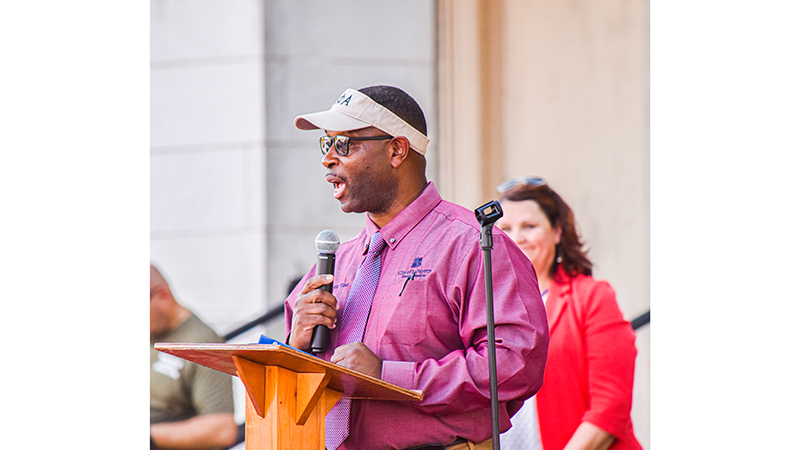 Downtown LaFayette was alive with activity Wednesday evening as people gathered for Taste of LaFayette, an event designed to kick off Main Street Alabama’s work on improving the city. All around were booths housing food and drink vendors, craft vendors, church representatives and others.

There were several speakers at the event. ​​Vision LaFayette committee member Jody Stewart, who helped organize the event, gave a brief introduction and welcomed everyone.

Chambers County Commissioner Doug Jones of District 2 welcomed everyone and said a prayer. He thanked everyone who had made Taste of LaFayette possible.

“I’d say I know it was a lot of hard work, but the hard work is now only just beginning,” he said. “So, we’ve got to all pull together to make this project a great one. I pledge that the city and the commission will work together to make LaFayette the best it can possibly be.”

“It is a great day to be here in LaFayette, Alabama,” said LaFayette Mayor Kenneth Vines. “It is a great time to be a citizen of LaFayette, Alabama. To the LaFayette city council members, my official staff, elected officials, distinguished guests and fellow citizens here and at home, we are gathered here this evening for you to hear and witness the great news that is about to take place here in our great city — Main Street Alabama.”

Vines asked LaFayette City Council members and members of Vision LaFayette committee members wave their hands and stand up to be recognized.

“I want to personally commend Mary Helmer and her official staff with Main Street Alabama,” he said. “Thank you for taking the enormous step and believing in the citizens of LaFayette and the vision of the LaFayette committee members.”

LaFayette City Clerk Louis Davidson spoke on behalf of the Alabama Municipal Electric Authority, of which he is a board member.

“[The AMEA is] a joint action agency of 11-member cities,” Davidson said. “LaFayette will be the fifth member city that has been designated as a Main Street Alabama community. On behalf of AMEA, its president and CEO, Fred Clark, his staff and board members, we just want to thank everyone for coming out.”

Trisha Black, assistant state coordinator with Main Street Alabama, was the next to speak.

“Like the mayor said, we’ve been talking about LaFayette being a Main Street designated community for six years,” she said. “We’ve been here a few times. We’ve done an introduction to Main Street, and here we are. Guys, give yourselves a round of applause.”

Wirth said she moved to Alabama from Kansas in 2013 and that LaFayette was one of the first cities to contact her about becoming a Main Street Alabama community.

“I’m so, so pleased that you all have come tonight, and the training today was amazing,” she said. “It’s not often that somebody will come and listen to me for three hours.”

“We’ll be back in October,” she said. “We’ll be doing the resource team. You’ll get four specialists, one in each of the four points. That’s going to be a lot more public participation. But in July, August and September, Trisha and I will be coming in and out working with the board, working with the community to get you a good, solid organizational foundation to ensure your future success. I was a local Main Street director, myself, for 10 years, so I understand what it means when you know you’re ground zero where you’re at currently, and you know where you’re going to go.”

In a statement, Wirth said that after working with the resource team, the Main Street team will do a market analysis in the spring and then do branding for the city.

“But that’s not the end of the services we provide,” she said. “That’s just the three big ones that we do in the first couple of years that you’re a part of the program.”

Also in a statement, Black said Main Street Alabama has something for everyone.

“So downtown is a place that everyone can get behind,” she said. “And there’s no doubt in my mind that the people that have showed up are going to embrace what’s happening here and roll up their sleeves and make sure good things happen.”

One of the attractions at the festival was a lemonade and treats stand run by Jason McElvy and his children, Ryan and Bradley McCelvey. Jason said it was new and that his mother helped him and his boys put the stand together.

“My youngest, Ryan, has been wanting to do a lemonade stand for weeks,” Jason said. “So, it seemed like a prime opportunity to try it out.”

One of the visitors in the crowd was Ansley Emfinger, the project manager of the Chambers County Development Authority.

“I’m just excited that LaFayette got Main Street designation, and I’m excited about the opportunities that it’s going to bring to LaFayette,” she said.

There were several competitions at the event, including a pie and cake contest.

The oldest person in attendance was 87-year-old Jim Weldon, who received a plaque. The longest-married couple were Jasper and Thelma Sanders, who had been married for 58 years. They received $100 for a date night.

Citizen Lauren Fuller was announced as the winner of the Vision LaFayette scavenger hunt and received a $100 bill.