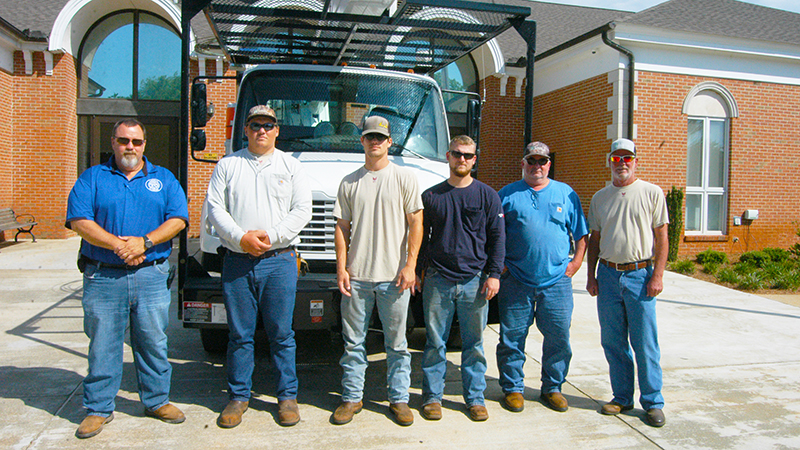 LANETT — Monday, June 6, is Alabama Lineman Appreciation Day. In 2014, the Alabama Legislature designated the first Monday in June to acknowledge the dedication of line workers across the state for the critical job they do in serving their local communities. The linemen are the key front-line workers who see that reliable energy powers homes, businesses and industries.

Line workers are accustomed to doing their work under challenging circumstances, such as in the aftermath of storms and natural disasters.

In 2020, for example, Alabama Power employees replaced over 3,800 power poles, more than 17,000 spans of wire and more than 30 transmission structures. More than 10,000 line workers from 25 states and Canada assisted them in these storm cleanups.

Closer to home, the City of Lanett Utility System serves 3,246 residential, commercial, and industrial power customers. The superintendent, Allen Summers, has over 22 years of experience keeping the city’s power going. Lamar Oliver and Glenn Templeton have combined close to 30 years of experience in the city.

Newer employees such as Austin Fetner, Carson Aldridge and Keith Lowery have the advantage of undergoing first-rate training early in their careers.

“Our wholesale power provider, AMEA, and the Tennessee Valley Public Power Association helps a lot with this,” Summers said. “We have more opportunities to train than we ever have, and it’s a good thing. We also have better safety equipment than we once did. Our PPE (personal protective equipment) includes safety glasses, hard hats, rubber gloves and flame retardant clothing.”

“We have a good group of guys in the department, and they know what to do to get the power going again when it goes down during a summer thunderstorm,” Summers said. “The weather is so unpredictable this time of year. A pop-up thunderstorm can be as damaging as a major storm system coming through.”

The city’s utility trucks are constantly tested to ensure they will be fully operational when needed.

Being prepared for any emergency is a big part of the everyday job of a lineman. Limbs from overhanging trees are frequently trimmed away from the city’s power lines, and dead or dying trees near the lines are cut down. This makes it less likely a limb or tree will fall on the lines during a storm.

“We always prepare for storm season,” Summers said. “We know we have to be ready at a moment’s notice when June arrives.”

“The job of a lineman is absolutely essential, both to Alabama’s economy and our way of life,” said Fred Clark, AMEA President and CEO. “It’s a job that can be unpredictable and as a result, requires a unique combination of strength, coordination and problem-solving in order to be successful in carrying our the job of providing safe, reliable electricity.”

People can say thanks to a lineman for what they do by going to #ThankALineman on social media.