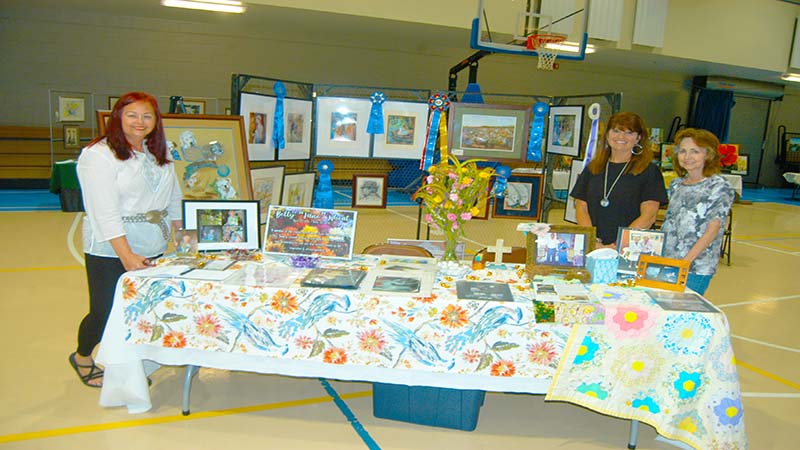 Talking about mom: At this past weekend’s art show at Valley Community Center, Valley Arts Council President Suzie Britt (at left) and sisters Roxanne Henderson and Cheryl Farr (at right) were delighted to talk about their mom, June Wheat, and the beautiful works of art she created in her lifetime. One of Suzie’s favorite paintings is the collage (at left) her and her mother did of her bulldogs. Wheat had a degree in art and design from the University of Georgia. During her lifetime, she taught art in Atlanta area schools and at Southern Union State Community College. Photo by Wayne Clark.

VALLEY — Valley Arts Council President Suzie Britt was pleased with the turnout at this past weekend’s first ever Memorial Art Show.

“We had steady streams of people coming in all day, especially on Sunday afternoon,” she said. “It was definitely one of our best-attended events ever. It couldn’t have been any better. We got lots of compliments on how everything looked, and people coming out to the show enjoyed meeting people they hadn’t seen in a while.”

Britt said she was looking to have another memorial show.

“We had 40 different displays,” she said. “That was okay for a first such showing, but we had so much information coming in late on other artists with local ties who have passed away. We’d like to feature their works in a show within the next year or so.”

The Arts Council’s next event will be coming up the first weekend in November. It’s going to be special in that it will be the 20th-anniversary show. The Arts Council was formed in 2002, and the first show took place at the Cotton Duck. The shows then moved to the Community Center when it opened.

“Our fall show will be in two parts,” Britt said. “The main show will be for those who are 18 years of age and older. It will be inside the Community Room. There will be a children’s art show for those under 18 in the Bobby Crowder Room. Dr. Lacey Southerland of Point University will be directing it.”

The fall show will be a judged event with ribbons being awarded to the winning entries.

The Memorial Arts Show included some unexpected twists. Three different paintings of the same subject were on display at three different exhibits. Shown was a very colorful floral arrangement. One was done by Jim Longshore, who had taught art classes, and the other two were done by two of his students, Mary Howell and Mary Morgan.

One painting moved some people to tears. It was completed in 1936 by Shawmut first grade teacher Lonita Pinkard. It depicted Jesus Christ on his knees, looking toward Heaven with a beam of light shining down on him.

One of Pinkard’s former students, Joyce McClendon Robertson of Marietta, Georgia, said she couldn’t remember having previously seen that painting but was pleased to see it.

“Lonita was a dear friend of my aunt, Verna Tatum (who also had her works on display at the show). I can remember hearing her talking about Lonita all the time. When I saw that this painting had been done by Lonita, all I could say was ‘My goodness!’ My daughter has two of her paintings in her home.”

Pinkard was a native of Milltown and lived to be 103 years of age. She loved to paint and was still doing it when she turned 100.

Jim Longshore was one of a number of local art teachers who had their works on display, Suzie Britt’s mother, June Wheat, had a degree in art education and design from the University of Georgia and taught art in Atlanta schools and at Southern Union State Community College. Jeanette Mason taught art along with Gail Dyess, who had a degree in art from Auburn. Dress’ younger brother, Barry Maddux, was at her booth over the weekend and talked about his sister’s work.

“She was born and grew up in Fairfax and was a member of the Fairfax Nazarene Church,” he said.

At one time, Dyess was the chair of the visual arts wing of the Painted Rock Arts Society.

One of the artists whose works were on display, Barbara Jo Johnson, was the mother of Valley City Clerk/Treasurer Cathy Snowden. Johnson passed away last year. She loved painting her pets, flowers, old homes and historic buildings.

Britt and two of her sisters, Roxanne Henderson of Arab, Alabama and Cheryl Farr of Cusseta, talked to people about their mother’s artworks. Among them was a large collage of Suzie’s bulldogs and a sketch of legendary Alabama Coach Paul “Bear” Bryant.

“I was expecting this show to do well, but it turned out even better than I expected,” Britt said. “We have lost so many of our talented artists over the years. They are gone, but their works live on, and they have family members who are proud of what they did. It’s gratifying to have their artworks displayed.’ We definitely want to have another memorial show to display the works of other gifted artists who have passed on but whose artworks have a legacy behind them.”