Valley football prepares for return to 5A 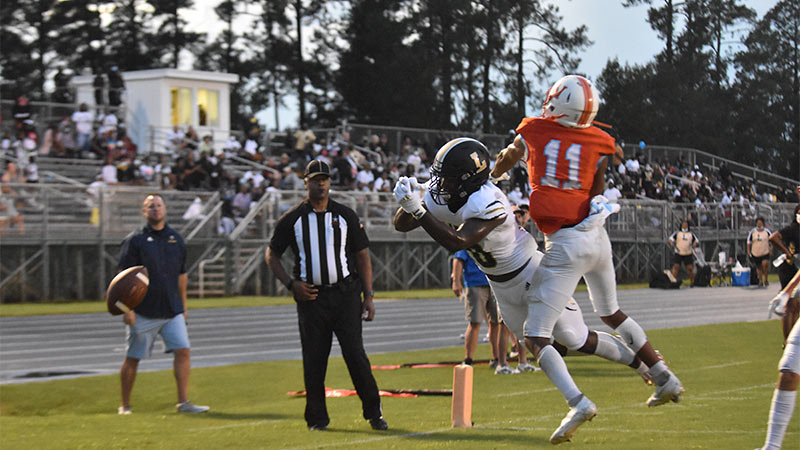 Denali Dooley breaking up a pass in the game against Lanett last year.

The Valley Rams spent the last two years in 6A, but a drop in enrollment has seen them return to 5A. For the football team, this means the competition might be slightly easier for the Rams.

“That’s going to help us a lot,” Valley Head Coach Adam Hunter said about moving to 5A. “There wasn’t a time last year where we weren’t playing some division one players. When your enrollment is half of the teams you’re playing, you’ve got that challenge.”

“We competed in 6A, and you hope that these guys that have been in that 6A level for the past two years can apply what they learned at the 6A level and apply it to 5A,” Hunter said. “You hope the game kind of slows down for us, but we stay at that 6A level of speed in the game.”

Hunter doesn’t think the move to 5A will affect the work ethic of his players.

“I don’t think our kids can become complacent,” Hunter said. “They know what it takes to be a championship team at the 6A level. Our guys are hungry. This summer has been one of the best summers we’ve had since I’ve been coaching here. These guys are really dedicated to getting better.”

As for the summer, Hunter wants his team to focus on physicality.

“We have to focus on being physical, especially with our offensive and defensive linemen,” Hunter said. “We have to take our time in the weight room and get strong. We take a day every week and have a competition day so they can get that winning mentality.”

As far as this year’s team, Hunter is most excited about junior quarterback Cam Dooley.

“I’m really confident in our quarterback,” Hunter said. “He throws the ball well and reads the defense well. He’s a dual threat, and he can run the ball well.”

As for the defense, Hunter is excited about the front seven.

“We’re most veteran at our linebacker position, but our defensive line has really controlled the game for us in the past,” Hunter said. Valley will continue their summer workouts throughout July and will start padded practice at the start of August. They will play their first game on Aug. 19 against Handley.