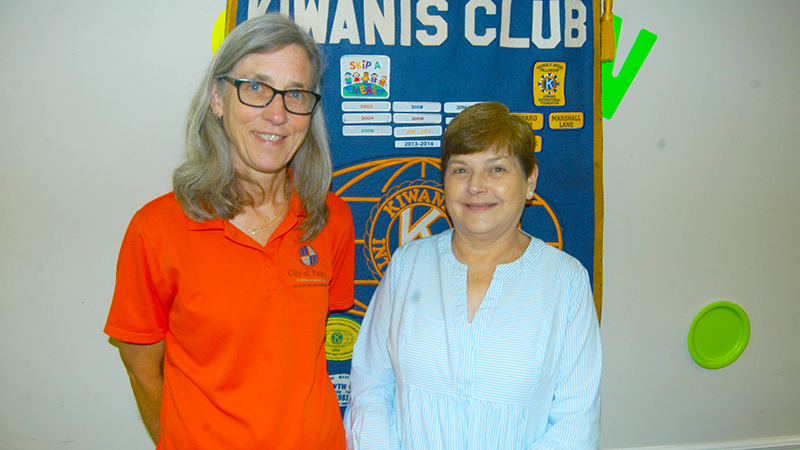 Talking recreation: At Wednesday’s noon-hour meeting of the Kiwanis Club of Valley, Valley Parks & Recreation Director Laurie Blount (at left) talked about the long, slow comeback from COVID-19. At right is Debbie Yates, the club president. Photo by Wayne Clark.

VALLEY — On Wednesday, Valley Parks & Recreation Director Laurie Blount talked about the long, slow climb back to normalcy her department has been making since the COVID-19 pandemic began in the spring of 2020. She was the guest speaker during the noon-hour meeting of the Kiwanis Club of Valley.

A long-time recreation director, Blount came to Valley from Paducah, Kentucky 12 years ago. She had two school-age children at the time. One has earned an MBA and has a promising career ahead in the business world. The younger child is in college and well on the way to doing well in life.

“We are slowly getting back to where we were before COVID,” Blount said. “We are having somewhere between 250 and 300 people a day coming to the Community Center. We were around 400 a day before COVID.”

Non-members can participate in Community Center activities by paying a daily fee.

“A lot of youngsters are doing that to come in and play basketball,” Blount said.

Valley Senior Center, which is also housed in the Community Center, is also getting back to its pre-COVID numbers. “We have 41 seniors who are active in the congregate program, which meets every Monday through Friday,” Blount said. “With our buses, we are delivering meals every day to 111 homebound seniors. Those a good numbers for a city the size of Valley.”

Grants are being sought to replace the Senior Center buses. There are three of them with the newest one going back to 2004.

“We hope to replace the entire fleet over the next few years,” Blount said.

The city is waiting to hear back on a grant proposal for a new playground that could be built on the Shawmut airport site.

“If approved, it will be the largest playground in Valley,” Blount said. “I’m really excited about this.”

This has been a busy season for tournaments at Valley Sportplex. There were four of them in May, with some major ones scheduled for the coming weeks. A youth baseball tournament with 28 teams will be taking place there next week, and a state tournament for girls’ softball is scheduled for July.

Something many people may not be aware of is that weddings have taken place in the huge community room inside the Community Center. It’s $1,000 a day to rent the big gym and $50 to rent any of the nearby rooms.

There’s plenty of space inside the community room, and some couples have been very creative in decorating it for their big day.

Sometimes it takes some rescheduling of events when a big wedding is taking place.

“We’ll have to figure out what to do,” Blount said.

Blount also runs the Valley Farmer’s Market on Friday afternoons. It has been open for several weeks and should get more participation as the crops come in.

“It’s slim right now, but we expect it will pick up soon,” Blount said. “We have vendors selling everything from local honey, eggs, jams and jellies and some really good cakes.”

The annual July 4th fireworks show at Valley Sportsplex is tentatively set to take place, but there is a problem. There has been a shutdown in China due to the latest COVID variant. This has caused massive delays in the export of fireworks to the U.S. Blount said she’s talked to Casey Chambley who does the fireworks shows and has been told that he can’t guarantee he will have the fireworks for a show by then.

“If we can’t do it on July 4th, we will try to do it Labor Day weekend,” Blount said.

Valley Parks & Recreation is having problems in having an adequate staff.

“It’s an issue everywhere,” she said. “Not having the people we need is causing us problems in our tournaments.”

There have been weekends, for example, when Valley Parks & Recreation didn’t have enough staff to cook hot dogs at the concession stand; they had to order pizza instead.

“We make money at the concession stand,” Blount said.

There’s also been a problem in hiring enough lifeguards for the Community Center pool.

“We have gotten people from LaGrange here to take swimming lessons,” Blount said. “They have been having problems in hiring lifeguards, too.”

State Rep. Debbie Wood, who was at the meeting, asked Blount if the Community Center is still serving as a storm shelter.

“We have been lucky not to have been hit by a bad storm in recent years,” she said.

Blount said the Red Cross had provided cots for such an event and that they were in storage at the Community Center. “We don’t know if we have enough of them for a major storm,” she said.

“Some people don’t know where to go in the event of a major emergency,” Wood said. “We need to get the word out about where they can go.”

“We will definitely open our doors in the event of an emergency,” Blount said.

Valley Parks & Recreation currently has 11 employees. This includes both part-time and full-time personnel.

“I don’t know what happened to make people not want to work,” Blount said. “I have been working ever since I was 16.”

The Community Center hosts many different events. An art show will be taking place inside the big gym this weekend. It will be Valley Arts Council’s first-ever Memorial Art Show.

“I think a lot of people will come to it because of what it is,” Blount said. “If we could find someone to teach it, I would like to have dance classes.”

Wood said that a problem communities like Valley and Lanett are facing involves the lack of public transportation.

“A lot of people don’t have ways to get around,” she said. “There’s a desperate need for it, and we have been looking at doing something about it.”

“We have 111 meals being delivered to home-bound seniors five days a week,” Blount said. “That’s a lot for a city our size.”