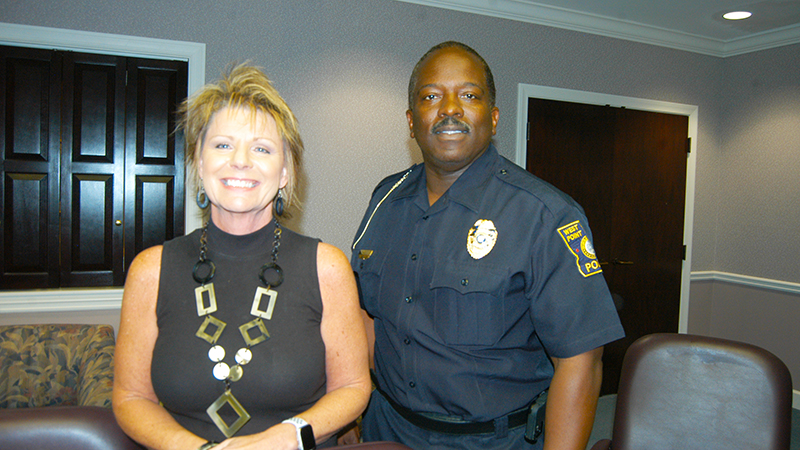 Talking summer safety: At a recent meeting of the West Point Rotary Club, West Point Police Chief Donald Britt (at right) offered some tips on being safe from criminal activity during the summer months. Pictured with Britt is Julie Ambrose. Photo by Wayne Clark.

WEST POINT — Police Chief Donald Britt has a simple, straightforward message for anyone out in public on these lazy days of summer — don’t let your guard down and be distracted.

“Beware of your surroundings and pay attention to what you are doing,” he told members of the West Point Rotary Club at their June 16 meeting. “Don’t be distracted by talking on the phone when you are walking out of a store. Criminals are out there looking for a chance to attack people when they aren’t paying close attention to their surroundings.”

Britt said it’s not a bad idea to look under your car before unlocking the door to get inside.

“A criminal can hide under it and grab you when you are unlocking the door,” he said.

The chief said he didn’t want to alarm people but that it’s important to be prepared for anything that might come up.

“Consider shopping with others,” he said. “There is safety in numbers. Avoid walking alone in dark, isolated areas such as back parking lots. Keep your wallet or purse close to your body, and remember to dress casual and comfortable.”

If there’s one rule to always follow, it’s to keep your car locked at all times.

“Avoid parking in isolated areas, and when it’s dark be sure to park in an area that’s well lighted. Every time you leave your car, take all personal property out to the vehicle.”

Britt is originally from Griffin, Georgia. He’s been the chief of the West Point Police Department for the past four years.

“I enjoy what I do,” he said. “I like coming to work every day knowing we can serve citizens every day. We are trying to do the best job we can.”

He has some simple but important advice to get across every time you sit down inside your car.

“Always buckle up and never text while driving,” he said.

No matter how many times people are told to always lock their cars, some people will forget to do so.

“Criminals are looking for cars that are unlocked,” Britt said. “They don’t want to call attention to themselves by breaking out a window. If a car is left unlocked, they don’t have to worry about that. Please lock your car and take the keys inside with you.”

Britt offers some tips for anyone planning an out-of-town trip.

Britt said it is a wise precaution to make sure your home’s windows and doors have secondary locks. It’s also a good idea to keep expensive items out of plain view from the outside. It’s wise to flatten boxes and conceal product pictures when putting the discarded boxes on the outside.

Members of the club asked Britt for advice on what to do when approached by panhandlers asking for money.

“Report it to us,” he said. “We have had problems with this from habitual violators.”

Britt asks everyone to be wary of phone scams. He said that he knows people who have lost over $100,000 on Bitcoin scams.

“Do your research when it comes to Bitcoin,” he said. “Some of it is legitimate and some is not.”

Another all-too-frequent scam is someone who calls you seeking monetary donations for a police fund.