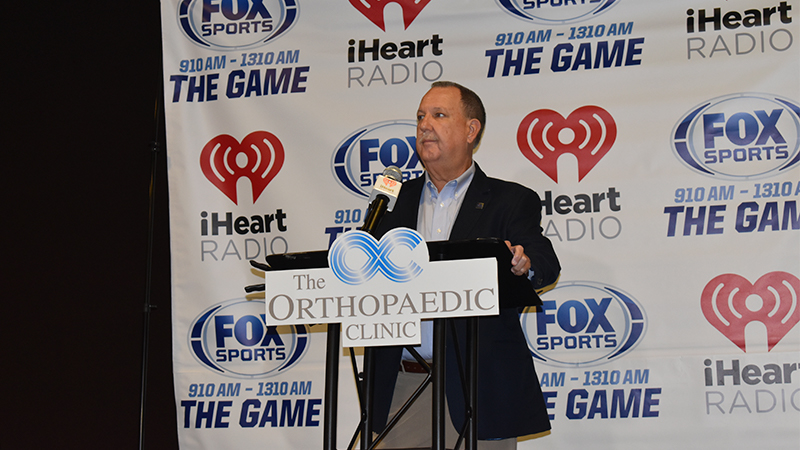 One of the main things addressed at media days was the introduction of 8-man football to the AISA. Before the AISA included it, teams that played 8-man football had to play independently against teams from all over the country.

There will only be six 8-man football teams to begin with, and they will be a separate classification. Those teams will play in the state championship game in Montgomery around the same time as the other AISA championship games.

“This is something we’ve discussed the last few years,” Beck said. “We kind of convinced the athletic council to have 8-man football. We could see this coming down the road.”

“We’ve had some schools that have closed because of losing a football program,” Beck said. “Football is the bellcow. There’s no way around it. Once there was some talk of schools closing, kids would scatter and move on to other schools. Next thing you know, the football program is gone, and the school is closed. I’m an old school 11-man football coach, but we have to look at what’s best for the overall program.”

Beck also mentioned he would like to see the 8-man teams eventually rejoin 11-man classifications. Beck coached at Springwood back in the 90s.

“Springwood is where I coached for 12 years. They won state championships,” Beck said. “Who in their wildest dreams would ever think Springwood would be playing 8-man football? Not me. I remember the days when the stadium was packed. I’m from the valley. The textile mills ran the valley. Now the textile business is pretty much gone, and that led to this in my opinion.”

Beck also talked about their partnership with the SECIS, which lets AISA schools play neutral site games against teams from Georgia, Mississippi and South Carolina.

“We meet with them every year and have a roundtable discussion,” Beck said. “A couple years ago, we started a football game, and we led it at the Cramton Bowl. Each association would bring in two schools. This year, we have Chambers Academy and Escambia Academy representing the AISA. Those are our powerhouse 2A schools.”

This will be the first time Chambers Academy competes in this competition.

The SECIS games will be held in Carrollton, Georgia on Aug. 27. There will also be an SECIS volleyball competition, and Macon East and Glenwood will participate in that.

“It’s great for our student athletes to be able to experience something like that,” Beck said. “Hopefully, it will grow to other sports as well. Mississippi hosted a golf outing for the four associations in the spring.”

Beck also discussed the close relationship between the AISA and the Alabama High School Athletic Association.

“We have met with coach [Alvin] Briggs and his staff,” Beck said. “We’re just looking at a couple options with cross-play. It’s been in discussions.”

Beck is hoping some AISA teams will form rivalries with AHSAA teams, but he mainly wants it for other sports besides football.

Several schools from the AISA have joined the AHSAA because of the cost of travel.

Beck ruled out removing classifications to cut down on travel costs due to the difference in competition.

One of the other major changes to the AISA this year is the 3A playoff will feature six teams, and the one and two seeds will have byes.

“Our plan is to have all four classification championships on the same day,” Beck said. “In 1A, and 2A, there will be a normal eight team bracket. In 3A, the one and two seeds will have byes. Usually the one seed is going to be pretty good. The number eight team usually has a tough year. Why do you want to match up the number one and eight teams in the playoffs?”