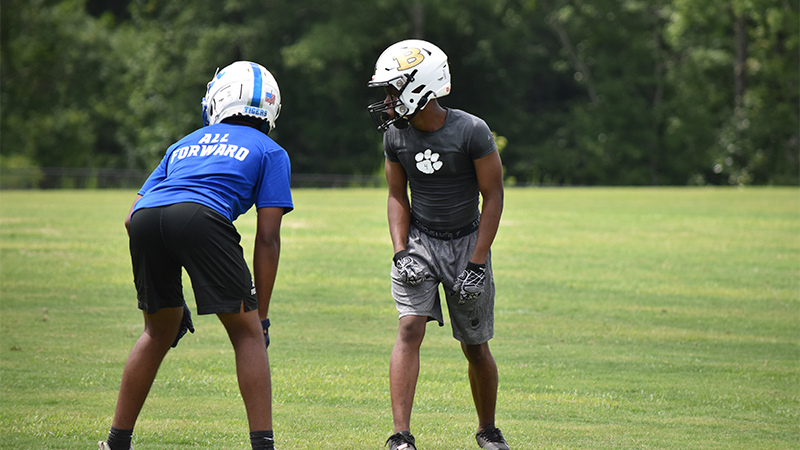 The scrimmages consist of 11-on-11 action and 7-on-7 drills. It’s a no contact practice as players aren’t able to have padded practices due to AHSAA rules.

Beulah, which is a 3A program this year, competed in scrimmages against 7A Auburn and 5A Charles Henderson. Loachapoka, a 1A team, was also at the scrimmage.

The scrimmages gave head coach Matt Hunter a lot to think about for their upcoming season. Coming off a two win season, the Bobcats have a lot of work to do.

“We’re always looking for work,” Hunter said. “We have some local teams that don’t have their equipment yet, so we reached out to Auburn High. Luckily, my brother is a coach at Auburn High, so we always come up here. We’re just thankful we can come up here and compete with these really good teams. These guys are giving us some good work, and that’s what it’s all about.”

Hunter thinks he can evaluate his players well, even when playing larger schools like Auburn High.

“We can definitely evaluate them,” Hunter said. “The physicality aspect may not be there because you’re not in pads, but you can still move people around. What you really want to see is how they react when things don’t really go your way. Whether it’s an interception or a dropped pass, we want to see where your mental toughness is.”

Hunter sees these summer scrimmages as a testing point for his players.

“This is where you grow together as a team,” Hunter said. “Whether you blow man coverage, you get to see who picks you up and helps you out. It helps form a bond with these types of atmospheres. You develop bonds not just with our guys but with kids from other schools. It’s good for the school and the kids.”

Hunter liked some things he saw from his players at Auburn High.

“We’re getting a lot of kids to work,” Hunter said. “It’s a lot of kids who didn’t get a lot of playing time last year who are getting work right now. We have a lot of ninth graders who are competing, and they have to get work. I also like seeing the leadership from our seniors, and they’re helping these guys a lot. You want to see some mental toughness, good attitudes and some leadership.”

As for which position groups that stand out, Hunter had a lot of good things to say about his defense.

“Our secondary is going to be pretty good and so is our defensive line,” Hunter said. “We have a lot of depth in our secondary, which is good to see. It’s going to help us out, especially later on in the year. We’ll be able to rotate some guys in.”

One area that Beulah needs to improve on is their offensive line.

“We have some new guys, and that just takes a little bit of time,” Hunter said. “It usually takes the longest to mesh and gel together, but we’ve been working on it all summer. It’s great to be able to do this in this kind of atmosphere.”