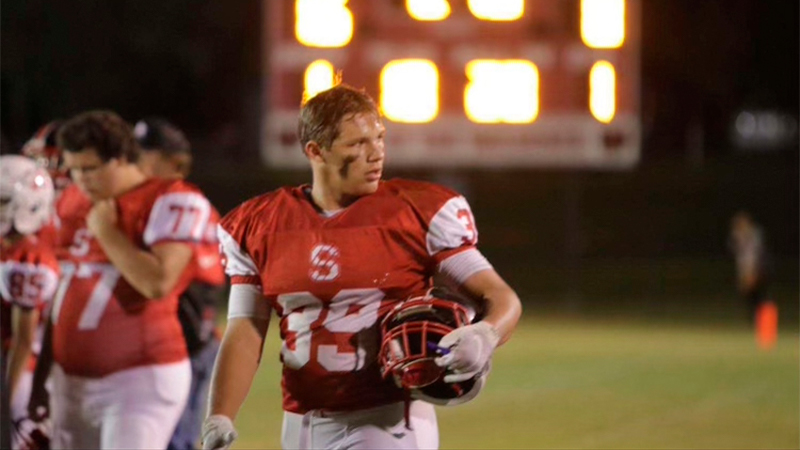 Cook will be a senior for Springwood this year, and he’ll be a running back, fullback, tight end and defensive end for the Wildcats.

Cook explained how he received his first collegiate offer.

“I went to a camp in LaGrange, and I let the coach know I was going to be there,” Cook said. “We met when I was there. He watched me do a couple reps. Two days after the camp, he texted me and gave me the news.”

Cook will most likely play defensive end for whatever school he goes to, but he’s open to any position that a team needs him to play.

“I’m going to work at every position, but I enjoy defensive end more,” Cook said. “I can’t say I’ll work harder at defensive end because I’ll play whatever position I’m needed at.”

It’s difficult for a player like Cook to receive attention from colleges when he’s playing at a smaller school like Springwood, but that hasn’t stopped him.

“It’s definitely hard. We’re in a small town and a small school,” Cook said. “I get on social media every day, and I just let coaches know I’m here, and I’m willing to do whatever it takes.”

Cook doesn’t believe that switching to 8-man football will affect his recruiting too much.

“The challenge is the same as it was last year and the year before,” Cook said. “Coaches are already looking at places like Auburn, Opelika and LaGrange. There are some really good athletes at Springwood. I think if they were at bigger schools, they’d get more attention. We only have 200 kids in the school. You have to work hard to put your name out there. You have to do it yourself.”

Cook doesn’t have a dream school, but he wants to stay in-state if possible.

“I want to be closer to my family,” Cook said. “I’m definitely interested in going to a place like Faulkner or Shorter in Georgia.”

Cook has been getting looks from local schools like LaGrange College and Point University.

“I was talking to their coaches, and they’re going to come out to some games this year,” Cook said. “There are definitely some places that are interested in me.”

Springwood has undergone a lot of coaching changes lately, but it hasn’t affected Cook too much.

“It doesn’t bother me because I moved from Valley to Springwood, but all the kids are happy now,” Cook said. “You want to call it trial and error, you can. We made a great hire with coach [Joey] Burch. He’s definitely the long term option for Springwood. He’s going to be great in the years to come.”

“He was willing to reach out to Shorter for me,” Cook said. “He helped get my name out to Faulkner. He’ll do his best to try and hook me up with coaches there.”

Cook is excited for Springwood to switch to 8-man football.

“So far, It’s been nice,” Cook said. “When you first hear about it, it’s kind of a shocker. You don’t really understand what’s happening. Once you start looking at the playbook and all that, it’s just the same. It’s everything you could run in 11-man just without three people. The adjustment for me has been pretty easy.”

Cook also credits the new weight room for giving him and the team more motivation.

“Before we had the new weight room, there wasn’t really any inspiration to go in there,” Cook said. “Now that we made that upgrade, a lot of the players and even guys who don’t play football are more inspired to go workout. You want to be able to be proud of what you have, and I think a lot of the guys are able to be proud. It’s definitely one of the best weight rooms in the area.”

As for his future plans, Cook just wants to play college football.

“My dream was just to play college ball,” Cook said. “I always wanted to know what it was like to play in front of 1,000 plus people. If I can get that experience, I’ll be happy. From there, I’ll go coach or play wherever I can go. That’s how I do things. If I can go pro, I’ll go pro. If I can coach, I’ll coach.”