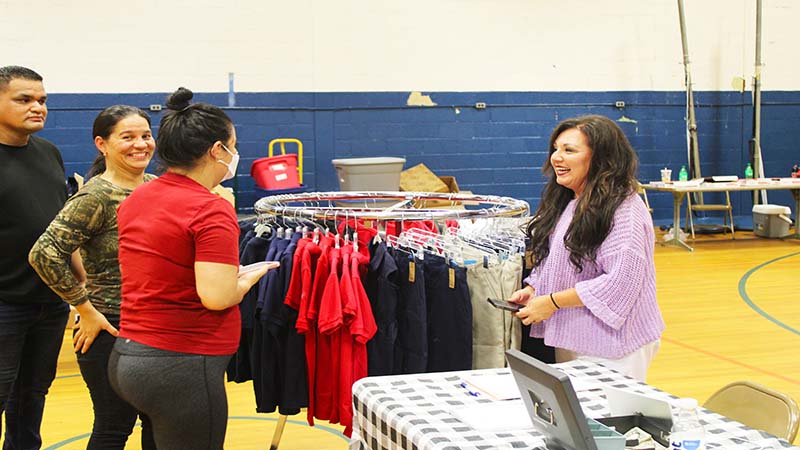 The first day of the Chambers County School District dress code expo saw a strong turnout, according to several vendors at the event. This comes after the school board’s decision to implement a new dress code starting in the fall semester.

Several vendors were present at the expo, including the Montgomery-based uniform company Uniformacy as well as Sass and Class Boutique based out of Valley.

Matthew Barranco, an employee of Uniformacy, said that they were excited about coming to Chambers County.

“When [the school board] contacted us about coming down, we were happy to help,” he said. “It is always nice to help out when schools are going through a change like this and we try to accommodate that.”

Barranco also noted that they did not have many slow times throughout the day.

“We have had a really good turnout so far,” he said. “There has been a steady stream of people coming in.”

Kimberly Fawley, representative for the locally-owned Sass and Class clothing store, noted that she thought the dress code was a move in the right direction by the school system.

“I think that [the dress code] is something that was long overdue,” she said. “While it is a little challenging now, I think that it will ultimately help the schools and that people will come to love them.”

For those still looking to attend, the expo will continue to operate at Bob Harding Shawmut Elementary School in Valley on Saturday from 8:30 a.m. to 5:30 p.m. On Sunday, the expo will move to the ALFA building in LaFayette, with the hours being from 1 p.m. to 5:30 p.m. Monday, July 18, is the final day of the Expo with sale hours from 8 a.m. to 5 p.m.