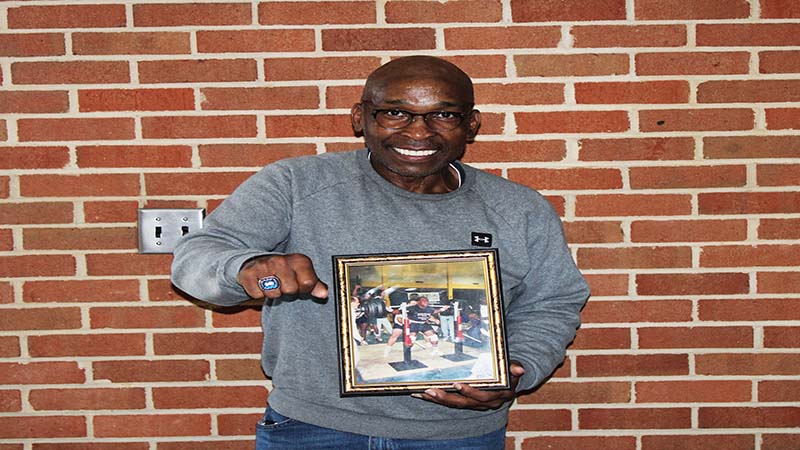 LaFAYETTE — Jerome Bailey has been admitted as a Class of 2022 member of the Alabama Powerlifting Hall of Fame. His induction took place at Noccalula Falls Park in Gadsden on July 9.

Bailey is a native of Chambers County’s Marcoot community and is a former Alabama State Trooper. He was a law enforcement officer for 30 and was with the LaFayette Police Department when he retired in 2011. He and his wife, Crystal, now operate a small business known as Bailey’s BBQ.

He has been competing in powerlifting since 1984 and trained with the Pegasus’ Gym Powerlifting Team in 1989. He competed in the National Peanut Festival Meet in Dothan, winning the 220 pound division and the meet’s Best Lifter Award.

Bailey is a 1979 graduate of Chambers County High School in Milltown. He was accustomed to hard work growing up, but it took a put-down from a blind date to motivate him to take better care of himself.

“We were both in law enforcement,” he said. “I was with the state troopers and she was withe the Lee County Sheriff’s Office. We met at Western Sizzlin’ in Valley (where San Marcos is today). I weighed about 270 at the time. She told me she was not about to go into a restaurant with a man with a belly like mine. It was hard to take, but it shamed me into getting into better shape.”

Bailey lost weight working out at the Olympian Health Spa in Valley and later got into powerlifting in Phenix City.

He stayed with it and got better and better. He started to make a name for himself when he worked out at Pegasus’ Gym in Lanett.

“Pegasus was a place with hard-core powerlifters and body builders,” he said. “We had one of the better powerlifting teams in Alabama. We were like a family. People like Roy Huguley and Tony Winters had a big influence on me. The atmosphere in the Pegasus Gym was very loving. Everyone got along so well.”

Bailey competed in powerlifting meets all over Alabama and Georgia. In 1991, he ranked third in the national 100’s 220 pound weight class.

He suffered a setback when he broke the humerus bone in his right arm. He went through rehab at the Hughston Clinic and was advised to give up powerlifting.

“I never stopped,” he said. “It was frustrating to get back to doing what I had been doing in powerlifting, but I did. I just had to take it slow, be patient and to get my strength back. God will open doors for you if you put your faith in Him.”

Bailey said he never expected to make the Alabama Powerlifting Hall of Fame and is humbled by it.

“I know so many of the men who are in it and deserve to be,” he said. “I competed with them at many meets.”

Bailey said he’d like to be best known as a good husband, family man, police officer, cook and businessman.

“My wife, Crystal, has helped me so much,” he said. “She’s a great wife, mom and cook. A man couldn’t have a better partner than her.”