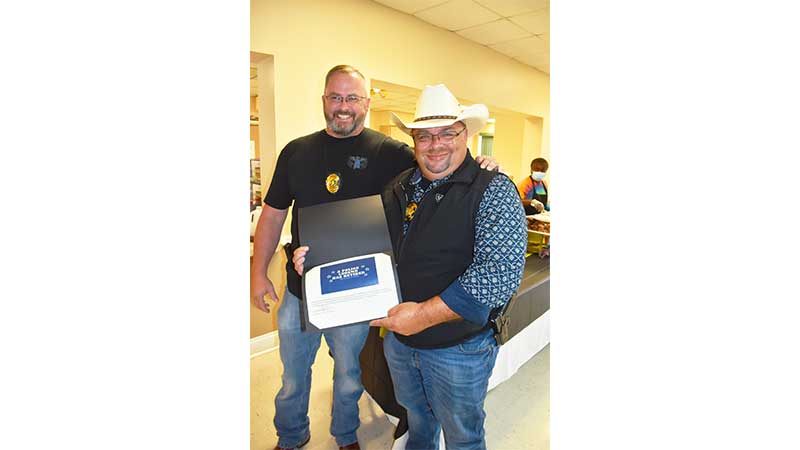 LANETT — Friday was the final day on the job for Johnny Wood as the City of Lanett’s police chief. During the noon hour he was honored with a retirement reception at the Jane Farrar Event Center in downtown Lanett. Mayor Jamie Heard presented him a plaque and proclamation thanking him for the job he did in his long tenure as a Lanett police officer.

“I have been in law enforcement for just under 29 years,” he told The Valley Times-News. “It was 28 years and 10 months to be exact. It has been an honor to serve and protect the people of this area.”

Wood began his law enforcement career in Valley in 1993. He was hired by Chief Jack Manley to serve as a patrol officer in the City of Valley. He was there for four years before moving over to Lanett.

Wood started out as a patrol officer in Lanett and moved up through the ranks as a field training officer (FTO), sergeant, lieutenant, captain and major before becoming the chief in 2018.

The event center was just about filled to capacity with police officers from the local area, city employees, family members and well-wishers. Wood was especially pleased to see some officers who were with the Valley Police Department when he went to work there almost 30 years ago. “I am so glad to see people like Jody Colley, who was my FTO, and Stephen Doyal,” he said.

The room was beautifully decorated by City Clerk Deborah Gilbert. At the entrance was a manikin dressed as a police chief and a registry where guests could sign in. There were lots of framed photos of the chief with fellow officers at various stages of his career. Each table was draped with the familiar police colors of black and blue with the familiar “Do Not Cross” yellow police tape stretched over them.

Wood was deeply touched when presented the proclamation by Mayor Heard and a certificate by Interim Chief Richard Casner.

The council had previously approved a resolution to award Chief Wood his badge and service revolver at his retirement. The certificate made it official.

“I’m glad I am not leaving this city for good,” he said. “I just can’t stay away for too long.”

Wood will be taking off the month of August and will return in September as an inspector.

Casner has been with the Lanett Police Department for the past 12 years. “Chief Wood and other officers in this room have been mentors to me,” he said. “It is an honor for me to present this certificate.”