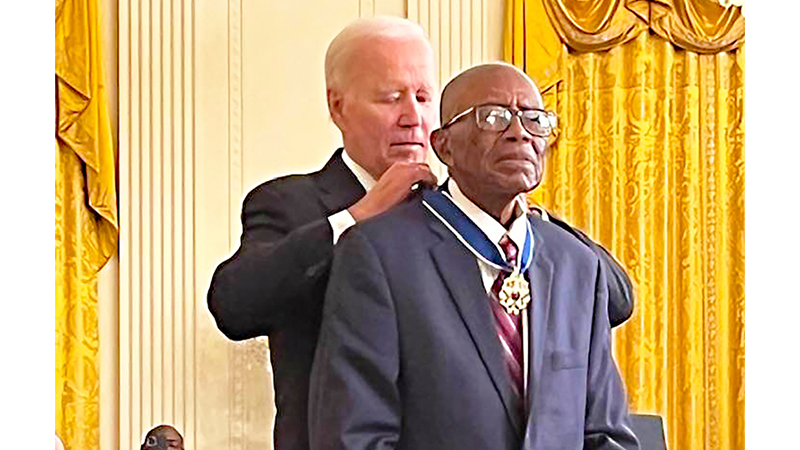 Civil Rights attorney Fred Gray was presented with the Medal of Freedom by President Joe Biden on July 7. This comes just a few months after the Lanett City Council honored Gray during Black History Month.

Gray, still an active attorney at 91, was one of the first African American members of the Alabama Legislature after Reconstruction. He served as the legal counsel on many of the nation’s most pivotal civil rights cases, including the legendary 1956 Browder v. Gayle case which determined that bus segregation was unconstitutional and effectively kick-started the Civil Rights Movement. He also defended Rosa Parks and Dr. Martin Luther King, Jr. during the early years of his career.

Gray’s impact continued throughout his decades-long career as he successfully defended a number of history-making cases including when he represented plaintiffs in the Pollard v. United States. This case revolved around the “Tuskegee Syphilis Study,” which involved several unethical procedures in which doctors left Black men with Syphilis untreated for decades. The case, which Gray won in a 5-4 decision, set the precedent for modern ethical procedures used by the Food and Drug Administration as well as the American Psychological Association.

Gray was one of 17 honorees who received medals last Thursday. Other honorees included gymnast Simone Biles and the late Arizona Republican John McCain. During the presentation, Biden commended Gray’s dedication and bravery in the fight for equality in America.

“When Dr. King, Rosa Parks, Claudette Colvin, John Lewis and other giants of our history needed a lawyer for their fight for freedom, you know who they called? They called a guy by the name of Fred Gray,” Biden said. “As one of the most important civil rights lawyers in our history, Fred’s legal brilliance and strategy desegregated schools and secured the right to vote…At 91 years young, he is still practicing law and still keeping the faith in the best of America.”

When contacted, Gray expressed his thankfulness for all of those who supported him throughout his career.

“I want to thank President Biden for awarding me with the Presidential Medal of Freedom, it is a high honor for which I am most appreciative,” Gray said. “Thanks to congresswoman Terri Sewell for nominating me for this award and to the many organizations and persons from all walks of life who sent communication to the president requesting that he bestow this honor.”

Gray reflected upon what the award meant to him and how he hoped it would inspire others.

“This award means a great deal to me as an African American civil rights lawyer born in the ghettos of Montgomery. It speaks volumes to the Civil Rights workers who have devoted their talents and resources toward improving the lives of Americans in this country; it speaks directly to African Americans in general,” he said.

“I hope this award will encourage other Americans to do what they can do so that all Americans can be treated the same, equally and fairly, in accordance with the Constitution.”

For those who are interested in making a difference in their own communities, Gray encouraged them to never give up and to constantly push for change.

“We must keep going, keep pushing, set the record straight and complete the task of eliminating racism and inequality,” Gray said. “We must do it in a nonviolent manner, until justice runs like water and righteousness like a mighty stream.”