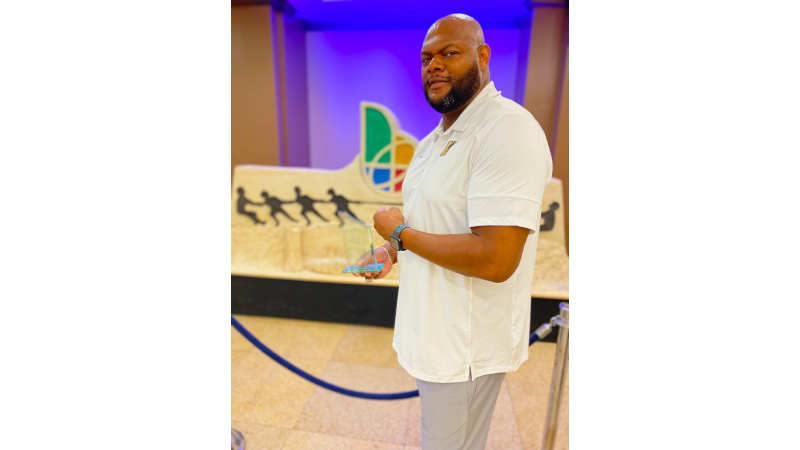 Lanett football head coach Clifford Story Jr. was awarded with the ALFA Alabama Coach of The Year award at the World Games on Wednesday in Birmingham.

Story was chosen among all coaches in the Alabama High School Athletic Association to win the award.

ALFA also gave an award to the female coach of the year along with a male and female athlete of the year.

The ceremony was held at Legacy Arena during the intermission of gymnastics.

“The experience was breathtaking,” Story said. “Even when I drove up to the event, every street was blocked off. We had to stop, and I had to give my name. Once we got through security, they escorted us around like celebrities. To be a part of an event like that was overwhelming. It’s something I will always remember. It gave me the feeling of when I won my first state championship.”

Story was on the jumbotron in the arena and was awarded multiple medals.

“There were people from all over the world,” Story said. “The way they handled things was first class. It was something I’ll always remember.”

Story also explained how he found out about the award.

“A few weeks ago a representative from ALFA insurance called me and said ‘Congratulations, you have been chosen as the ALFA insurance Coach of The Year. You’ll be presented at the World Games,” Story said. “They sent out the formal email last week, and I was overwhelmed. For me to be chosen among all the other great coaches we have in this great state, it just speaks volumes.”

Story said he still cares about the personal aspect of coaching.

“When you coach, you coach for passion and love the kids and want to see them do well,” Story said. “You really don’t coach for the accolades and awards but to be able to win this award and be presented at the world games, it’s up there with everything I ever accomplished in my life.”

Story also got the chance to enjoy the games while he was in Birmingham.

“I stuck around and watched a lot of gymnastics and a little bit of soccer,” Story said. “I saw people from all over the world come together and support each other. Even if you’re from different states, everybody cheers for everybody. That was good to see.”

Story’s favorite part of the games was the end of each gymnastic performance.

“As they were doing their scoring, every time the gymnast would come off the court, a lady would meet them there and hug them,” Story said. “They took a seat and went behind this pavilion. Even though all of the girls were competing against each other, they all hugged each other and encouraged each other as they finished up their routine. That meant a lot to me because when you’re in competition, a lot of times, you put all that to the side until the end. They were encouraging each other the whole time.”

After the games, Story went out to eat dinner with the other award recipients and ALFA representatives. Story also brought home three medals and a bag full of World Games memorabilia.

“I’m going to buy something and save it as a keepsake,” Story said. “It was just breathtaking. I heard about it, but to experience it is different.”