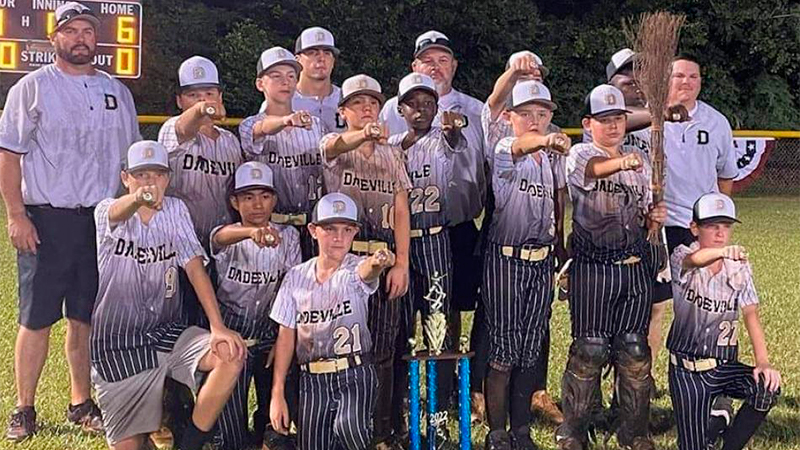 The Dadeville 12-under youth baseball team has advanced to the Dixie Youth Baseball World Series, but they still need to raise thousands of dollars for the kids to stay the week in Anderson, South Carolina.

Dadeville won the state tournament last weekend. They haven’t lost a single game in the district or state tournaments. They’re looking to win the Dixie Youth World Series for the first time.

Head coach Mike Simmons knows his team has a lot to be proud of.

“This is their third consecutive trip to the world series,” Simmons said. “We’re back-to-back state champs. We’ll be representing the state of Alabama in the world series.”

“The biggest thing with this age group is to just have fun,” Simmons said. “We’ll have some skillset stuff in practice where to the boys it’s a home run derby, but to me it’s training their eyes to see a ball. They’re having fun when they’re doing it. With temperatures the way they are, it’s important to make sure the boys are hydrated and enjoy coming to practice.”

Dadeville is practicing daily to prepare for the world series, but the biggest challenge will be raising money to stay in hotels in Anderson. The team won’t even be able to take a bus to South Carolina, and they’ll need $15,000 to supply hotel rooms to the players for the week.

“We’re working to gather donations to help fund this trip,” Simmons said. “Some of the parents can’t take a week off work and with gas prices the way they are, we see it as a challenge. We’re looking for donations and sponsors. We haven’t gotten to the point where we can put the boys on the bus.”

The $15,000 only covers the hotel rooms for the kids and their parents. The team will have to stay in a hotel for almost a week, and it’s $115 per night per family.

“We’re fortunate that we live in a small community,” Simmons said. “The people in LaFayette, Dadeville and the surrounding areas on Lake Martin have really helped to contribute to the youth. Our program has come such a long way that we have other age groups playing for state titles. Over the past three years, it’s kind of opened the eyes to the communities of what a great program we have.”

The success of Dadeville has also drawn kids from other areas to play for them.

Dadeville will compete from July 29 and will play until August 3 if necessary.