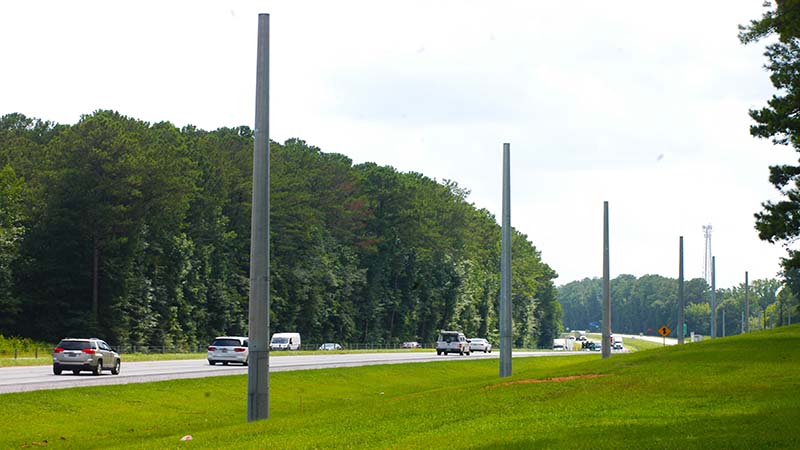 Anyone who has driven along Interstate 85 lately has probably noticed some big concrete poles going up along both the north and south-bound lanes. This is the first phase of a major lighting improvement plan. It will provide much better lighting along I-85 during the night-time hours for Exit 79 and for both lanes to and from the state line. The south-bound lane will be better lit from the Chattahoochee River bridge to just past the new 16,000-square-foot Alabama Welcome Center. The north-bound lane will have much improved lighting from the bridge over Moore’s Creek to the river bridge.

There will also be new traffic signals going up on Highway 29 at Exit 79. They will have mast arms, look much better than what’s there now and operate more efficiently.

The current project is thought to be the first major lighting improvement along this portion of the interstate since it opened in the 1960s. The neglect is obvious. Many of the original metal poles have long since rusted through, collapsed to the ground and been removed, leaving only their concrete base. What’s still functional does have the interchange liighted at night, but it’s not nearly as well lit as Exits 77 and 70, which have gotten improvements in recent years.

According to Chambers County Engineer Josh Harvill, we are now seeing the first phase of a $3.6 million project. More than $2.4 million of this amount will come from the federal government, a little over $1 million will come from Rebuild Alabama funds and $120,000 from Chambers County. The cities of Valley and Lanett have agreed to maintain the lighting on their side of the interstate.

According to the Alabama Department of Transportation (ALDOT) website, almost 45,000 vehicles a day cross the Alabama/Georgia line on I-85. Almost 8,900 of these vehicles get off at Exit 79 and nearly 26,000 vehicles are crossing the Highway 29 bridge over I-85 every day.

“It’s time we did something at Exit 79,” Harvill said. “Between 2009 and 2021, Exits 70 and 77 got some lighting improvements. We thought with this nice, new, much bigger welcome center opening, it would be a good move to have the interstate well lighted from the Chattahoochee River bridge to past the new center.”

The company has already made a good impression on Harvill.

“Those new concrete poles are so much better than what we had before,” he said. “They are much more substantial. The original poles have not been replaced since this section of interstate first opened in the 1960s.”

Those big concrete poles will allow for the installation of a modern roadway lighting system with LED luminaries raising the ambient lighting level to meet ALDOT and national standards.

“The project is in its earliest stages,” Harvill said.  “The magnitude of the changes that are on the way is just setting in.”