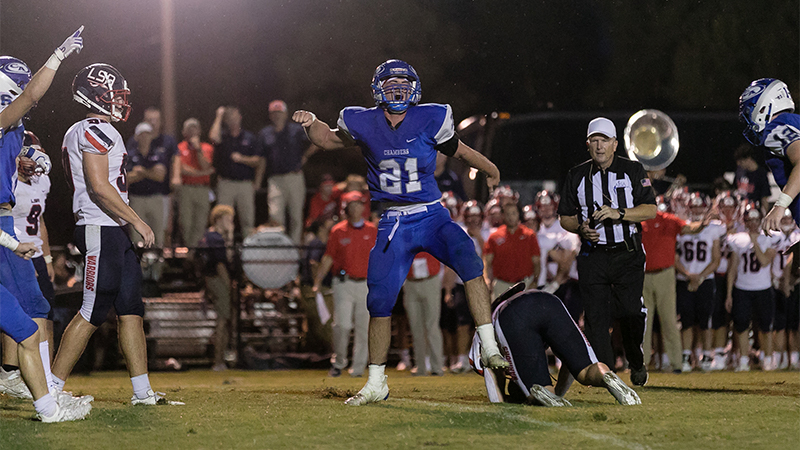 Chambers Academy’s Gavin Kight is not only their leader on defense, but he’s also attracting several looks from colleges.

Kight has only received one scholarship offer, which was from Trinity International University, but he’s still getting attention from several schools. Kight is being recruited by West Alabama, West Georgia, Birmingham Southern, Mount Union and Central Methodist University.

“I’m talking to other schools,” Kight said. “I’m going down to West Alabama for a camp. It started getting better this year. I started talking to coaches my sophomore year. It’s a little slow, but it’s going alright.”

For Kight, it’s tough to garner a lot of attention from bigger colleges since he’s at a smaller school.

“I’ve been DM’ing [direct messaging] a bunch of coaches,” Kight said. “I’ve been emailing them, texting them and sending them my fan mail. I’m just telling them who I am, and I give them Coach Allen’s number. It’s kind of hard because a bunch of kids are DM’ing coaches on Twitter, so they’re getting thousands a day and you’re lucky if you get one text after sending a hundred people your film.”

Chambers Head Coach Jason Allen also knows how tough it is for players like Kight to receive attention from bigger schools.

“With the advent of the internet and camps, I would like to think our guys get a fair shot,” Allen said. “These college coaches want to see how these guys at small schools compare to large school talent. The only way they can do that is at a camp.”

Despite going to a smaller high school, Kight thinks the college transfer portal will help him out.

“A lot of coaches don’t really look at the smaller schools,” Kight said. “You have these bigger schools like Auburn, Opelika and Phenix City. They’re going to go to those schools instead of a private school.”

Kight doesn’t have a dream school, and he’s open to any school who wants him.

“I’ve always kind of left that open,” Kight said. “I don’t want to have a dream school then have another school offer me and fall in love with them. You go where people want you to be.”

Kight believes his work ethic will be what college coaches like the most about him.

In his time at Chambers, Kight has earned the nickname, “Captain America”.

“I had a USA bandana, and I brought it out against Lee-Scott in our first game last year,” Kight said. “I had a pretty good game. Coach Allen called me after I hit a kid, and it kind of just stuck.”

Allen also had some good things to say about Kight’s high school career.

“Gavin has played varsity for us since eighth grade,” Allen said. “He’s always been physically well developed. He was big and fast at an early age.”

Kight saw his first playing time in the state championship as an eighth grader. He came in as a fullback on a key fourth down play.

“We put Gavin out there, and he never shied away. He just acted like he was supposed to be there,” Allen said. “We were facing fourth down and 2, and we gave the ball to Gavin. We blocked it up pretty good, but one guy leaked through. Gavin hit him in the hole. This kid was an older kid, and Gavin just bounced off and got the first down. It was that moment that I knew this kid is going to be a player for us.”

Gavin started as a freshman at linebacker, and was a key blocker on offense.

“Offensively for us, he’s been the unsung hero,” Allen said. “He has done a lot of things to make our offense work because we’re a power run team. He’s waited his turn in a day and time where waiting your turn is probably not the popular thing to do anymore. He’s always been loyal to our program. He loves being on the field.”

Kight finished with over 100 tackles in his junior year last year. Allen mentioned his max bench weight is 365 pounds. His max squat weight is 455 pounds. He can also deadlift 585 pounds.

He will also play linebacker in college instead of fullback.

“He’s a defensive player,” Allen said. “The fullback position isn’t as popular in college football as it once was. He translates as a linebacker at the next level.”

Kight will be entering his senior year at Chambers and will hope to receive more offers throughout the season.