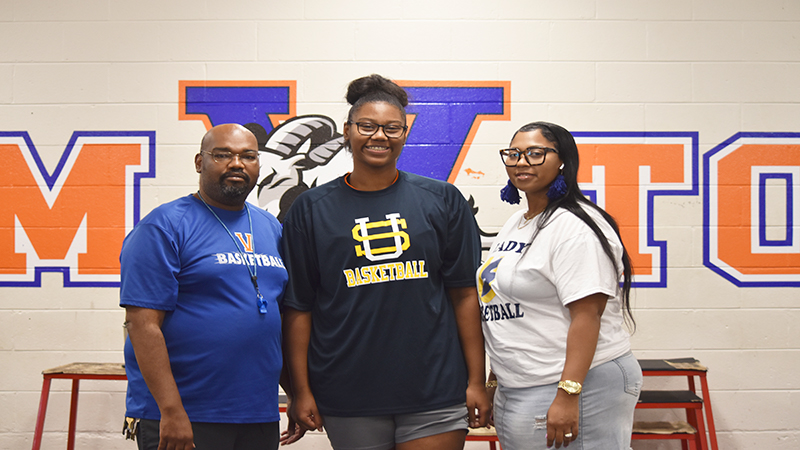 Jaylah, a 6-foot-5 center, chose Southern Union State due to the coach and her family connections, but she has cherished her time at Valley.

“I came here in the tenth grade, and I like playing here,” Jaylah said. “It’s better than the other school I went to. I like Coach Grimes, and I never forget the thing I hear him say. That’s ‘base line,’ because every time he says that we have to run, and we have to run a lot.”

As for Jaylah’s recruiting process, she knows it was a long and slow journey.

“It was very slow at first,” Jaylah said. “I was getting offers from Division III schools, some NAIA schools and a couple of other schools. Only one school offered me, and that was Crown College in Minnesota.”

Sturdivant then found herself at Southern Union State.

“I went to a recruiting thing at the school,” Jaylah said. “The coach’s wife of the boys team told me to create a Twitter, so that’s what I did. One of the first coaches that reached out to me on Twitter was him. We were in contact for about a year, and then he offered me the scholarship.”

“I didn’t want to pay for school,” Jaylah said. “I wanted a full ride somewhere. At Southern Union, I knew I could do that. My mom liked the school. My dad liked the school. It’s not far away. It’s right up the road, and if something happened to me, she could get to me. I like the coaching style and just the way he is about his team.”

As for what she can contribute to Southern Union State, she knows her height will be a key factor.

“That’s not something they’re known for,” Jaylah said. “They’ve done well without the height they have. The coach told me I’m the tallest person they’ve recruited. That’s what some of the parents say. I’m bringing more rebounds to the team and a lot of work inside the paint. They’re known for threes most of the time, so now they’re going to have somebody big inside the paint.”

As for meeting her future teammates, Sturdivant has only met one of the guards. Jaylah’s goal for her career is to just keep pushing.

“Along with myself and the high school, we’re proud of Jaylah’s accomplishments,” Grimes said. “I want her to understand and know that the work doesn’t stop here. Just because she received a college scholarship doesn’t mean she needs to stop, especially going to a two year school. There are possibilities that she can go on to a four year school. She becomes the second player since I’ve been here to commit to Southern Union.”

Jaylah’s mother, Toni, is glad she decided to stick with Southern Union State.

“I graduated from Southern Union, and she has several aunts and uncles who played basketball at Southern Union,” Toni said. “I was the last one in the family to graduate from there, so I’m glad she chose it.”

Jaylah will finish out her senior year at Valley before she moves on to college basketball.