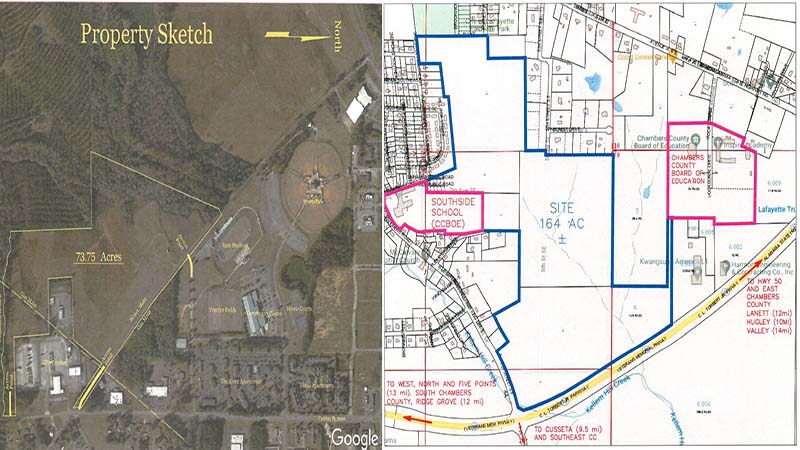 VALLEY — The City of Valley has donated 73.75 acres of land inside Valley Industrial Park to the Chambers County Board of Education for possible development as a consolidated high school. The land is located between Ram Stadium and the GFA trucking terminal on Fairfax Bypass. Due diligence on such factors as phase one and phase two environmental studies; environmental, topographical and endangered species studies, wetland delineation, along with cultural and archaeological resources and geotechnical surveys have already been conducted on the land, verifying that it is ideal for future development.

The city has donated the land to the Chambers County Board of Education for a three-year period. If a new school has not been completed on the site over the next three years, the land goes back to the city.

The council suspended the rules and approved an ordinance to do this after a first reading.

“It gives us great pleasure to do this,” said Mayor Leonard Riley. “It’s an excellent site.”

Riley had been the principal at Valley High before being the superintendent of the Chambers County School System for 20 years (1991-2011).

The property that has been donated is contiguous with the 12-acre site where Ram Stadium is located. That brings the total acreage potential public school land to more than 85.

“It would cost at least $6 million to build a new stadium today,” Riley said. “Twenty years ago we were able to do it for $3 million.”

Valley’s offer of a potential site for a new school is not the first one received by the Chambers County Board of Education. In late June, LaFayette Mayor Kenneth Vines sent a letter to Superintendent Casey Chambley offering a site near J.P. Powell Middle School in LaFayette as a possible site for a new consolidated school. He was acting in behalf of the entire city council.

“This site encompasses 164+/- acres, is in the City of LaFayette, is very near the geographic center of Chambers County and has road access from three sides, with a major highway (C.L. Torbert Parkway) frontage along the entire Southern boundary,” the letter reads. “In the event this site is chosen, the City of LaFayette will donate to the Chambers County Board of Education any or all of the site needed for the location of a consolidated high school.”

“The site is served by excellent infrastructure owned by the City of LaFayette,” the letter continues. “Both water and sewer mains are adjacent to the property. There should be no upgrades needed for either water or sewer service.”

The site also has adequate electricity and natural gas.