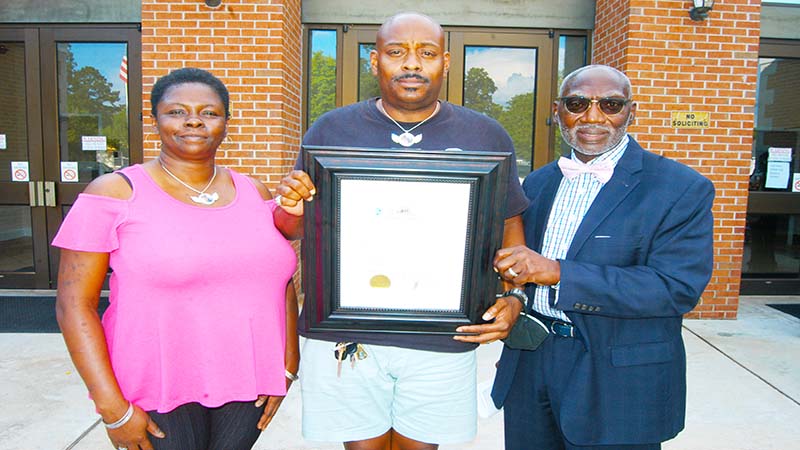 LANETT — The Lanett City Council has recognized a local businessman for relocating from the Atlanta area and starting a successful business in the city. John Radford V began a business in Lanett in 2006 and incorporated it as Piquarius Graphics in 2012. He will celebrate his 10th anniversary in that business on Sunday, July 10th.

Radford earned a B.A. in Finance with a minor in Management from Morehouse College, a Historically Black College (HBCU) in Atlanta, in 1996. Before starting his own company, he worked in banking, accounting, and real estate in the metro Atlanta area for several years.

In 2000, Radford and his father, John Allen Radford IV, purchased Bob Lee’s Graphic Displays in Lawrenceville, Georgia, and were proprietors of that business until 2005. The following year, the younger Radford moved to Lanett, where he started Piquarius Communications LLC, which specialized in low voltage cable installations, sign making, and apparel. Piquarius Graphics, a subsidiary of Piquarius Communications LLC, began on July 10, 2012.

“His signs and graphics can be found at various locations throughout the Greater Valley Area,” a mayor’s proclamation reads. “Having over 22 years in the sign-making experience, he is also a layman at Mount Hermon Baptist Church, a member of Early Star Lodge No. 395, a Prince Hall Affiliated Freemason Lodge, vice president of the Chattahoochee Humane Society Board of Directors, and a former ambassador with the Greater Valley Area Chamber of Commerce, where he won the Ambassador of the Year award two years running.”

Radford is married to the former LaShunda Michelle Sutton, a native of Valley. They are the parents of two sons, John Malik Radford VI and Brodis Clay, who are deceased.

“Mayor Jamie Heard and members of the Lanett City Council do hereby proclaim that we recognize John Radford for his exceptional legacy and congratulate as well as thank him for his 10 years of service to the citizens of Lanett, Alabama,” the proclamation reads. “Saturday, July 9, 2022, is recognized as Piquarius Graphics Day in the City of Lanett.”

“Ten years ago, the Lord told me to take a leap of faith here in Lanett, Alabama,” Radford told the council. “I have tried to be fair in all my business dealings. I want to thank everyone who has done business with me over the past ten years.”

Radford said that Proverbs 16:11 is the guiding Bible verse for his business. “Honest scales and balances belong to the Lord,” it reads. “All the weights in the bag are of His making.”

“They are deserving of this recognition,” said Council Member Tony Malone.

“There are some good things going on in Lanett,” said Council Member Tamalita Autry. “We thank Mr. Radford and Mr. Tucker for what they mean for our city.”