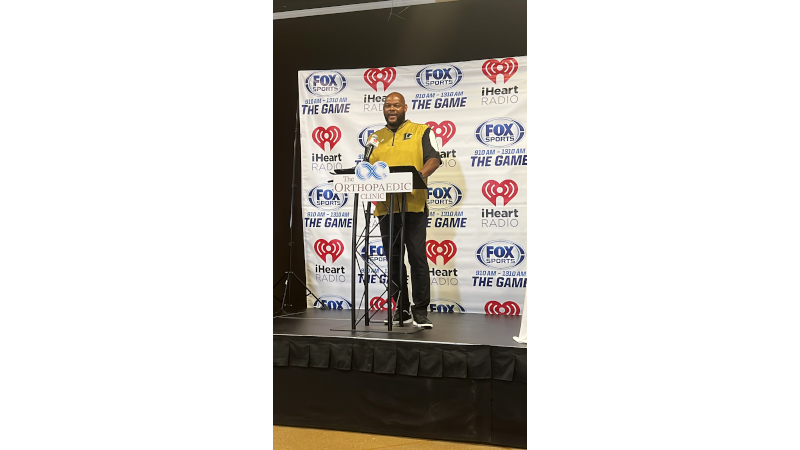 The Lanett Panthers were the last team from Chambers County to speak at media days on Wednesday.

Head Coach Clifford Story was joined by Taysean Darden, Cameron Sutton and Donahvan Dyer. Lanett lost more than 20 seniors from last year, and that was one of the main talking points.

Story is also one win away from passing Dan Washburn as the winningest head coach in Lanett history.

Lanett has dealt with a lot over the past few years, including losing their fieldhouse.

“We’ve had a tough year,” Story said. “2021 was a tough season for us. We had to take a bus to a church to work out. It took a toll on everybody. It caused us to grow up and be more responsible.”

Despite the loss of a fieldhouse, Lanett kept winning on the field.

“I was informed that we have the longest region win streak in the state of Alabama at 33 wins,” Story said. “We’ve won five straight region championships. That means a lot. We’re looking forward to the season. We’re excited, and everybody else is excited.”

Story will also have to deal with losing four coaches from last year.

“This will be the first year in a long time I’ve lost several coaches,” Story said. “Normally, I lose one coach every year, but this year I lost four to other opportunities. I’m pleased that they took larger roles. That means I’ve done something good.”

One of the new coaches for Lanett is Marcus White, who played for Auburn and the Tennessee Titans. He will coach the offensive line for the Panthers.

“We’re going to be young,” Story said. “We return three starters on offense and five on defense. The unique thing is all these guys who are stepping up played last year.”

One of the things Story discussed was the opening week game against Notasulga. The game will be a part of the first ever kickoff classic where Lanett will play Notasulga at Morgan-Washburn Stadium. LaFayette will also play Loachapoka at Lanett.

“We just want to bring these communities together to play football on Saturday,” Story said. “We want to have a really large crowd and just relax and play high school football.”

The most important thing for Lanett this year is that they compete.

“I tell my players all the time, ‘All I want is all you’ve got.’ If they compete and fight, then we’ll put them in position to win ball games,” Story said.

As for Story’s legacy, it means a lot to him that he will likely break the all-time school win record.

“It means I’ve had some great players and some great coaches,” Story said. “I really wasn’t locked in on that until last year because the media keeps up on that. Coach Washburn is a great guy. He’s a mentor to me. To be able to do it following a guy like him shows I’ve been surrounded by a lot of great people.”

Story plans to have a stifling defense despite losing his son, Caden, to Clemson.

“We’re going to play defense,” Story said. “They know my whole vibe changes when we switch to defense in practice. We’re going to hang our hat on defense.”

Lanett will also have a strong special teams group with kicker/punter Luis Bonilla returning from a torn meniscus.

“He’s healthy now, and he’s going to do kicking and punting,” Story said. “I have a young eighth grader who can kick the ball out to the end zone. We have two great kickers who will help us.”

After Caden left Lanett, Coach Story is out of Story children who can play for him, but the family pipeline isn’t done yet.

“I’m out of Story’s right now,” Story said. “I have some young Storys coming who are some nephews. They’re fifth graders and sixth graders, but they’re going to be special.”

Lanett has a difficult region, and they will play their rivalry game against LaFayette on Oct. 7, but they open the season against Notasulga on Saturday, Aug. 20.