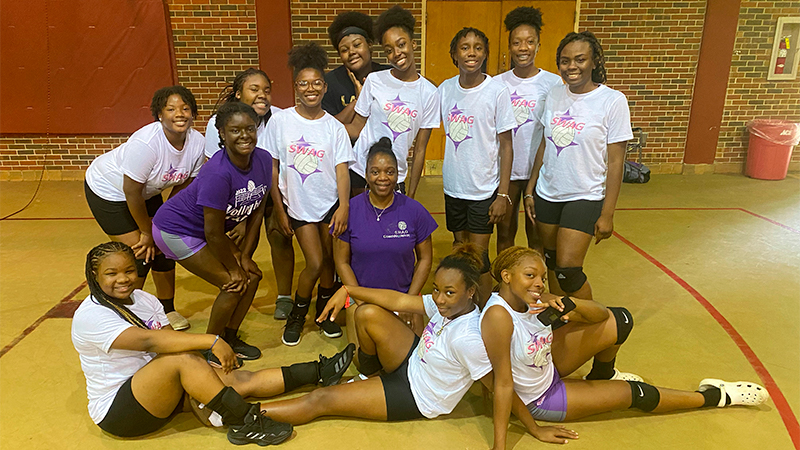 Lanett’s volleyball team spent the week at a camp in Roanoke, Alabama. The camp was hosted by S.W.A.G Volleyball or the South West Volleyball Academy of Georgia.

“I met Coach [Demeikia] Ivory through one of my Bama sisters,” Lanett head coach Krisse Story said. “I talked to her during the latter part of last week, and we were able to connect and get our girls into the camp.”

The camp took place from Monday through Thursday. Story and her team learned a lot from the camp.

“The biggest takeaways from the camp was sisterhood,” Story said. “A lot of the exercises she did that were centered around volleyball helped to cultivate sisterhood. Always look out for the person to your left or you right. Those are your sisters. We worked on fundamentals and their approach. We worked on setting.”

As for Story, she learned a lot of the subtleties of coaching.

Coach Ivory is a member of S.W.A.G., but she teaches volleyball in Douglasville, Georgia. Story is hoping she will help bring club volleyball to Chambers County.

The camp featured certain drills from Monday until Wednesday. Then they played a few scrimmage matches on Thursday.

“It wasn’t just our team versus other teams because it was an individual camp,” Story said. “We kind of mixed the teams up, so we did quite a bit of scrimmaging the next day.”

As for the rest of the summer, Lanett will just be continuing summer workouts until their first game against LaFayette on August 18.

“We’re excited about continuing to work and condition and get in shape as we prepare for our upcoming season,” Story said.

The girls will have a couple of days off next week, but Lanett will be holding a serve-a-thon on Thursday to raise funds for the volleyball program.