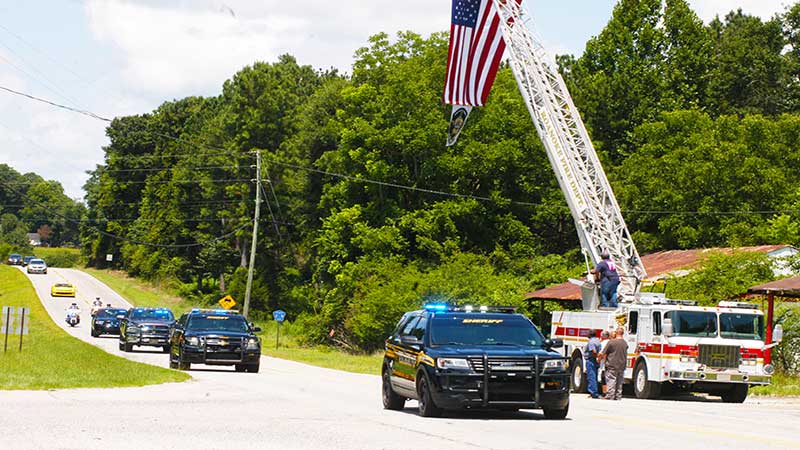 LaFAYETTE — Saturday’s Fallen Hero Memorial Honor Ride for Deputy J’Mar Abel was a big success. More than 130 motorcycles and street-legal vehicles were registered to participate in the 42-mile ride across northern Chambers County. Some participants drove from several hours away to pay tribute to the fallen officer.

One of Abel’s high school teachers made an eight-hour drive from Florida to be in it.

“It couldn’t have gone better,” said ride organizer Candy Miles. “We were well pleased with the turnout, and we know we raised a good bit of money for the family. It will take us several days to get it all counted.”

The bulk of the money will be going into a trust fund for Abel’s 4-year-old son Bryson and Gianna, Deputy Abel’s unborn child who should be arriving in late August. A portion of the funds will also assist in the birth expenses.

On June 20, Abel was killed when he lost control of his patrol car while assisting the Roanoke Police Department in chasing a suspect along Chambers County Road 278 between Roanoke and LaGrange. The single-vehicle mishap took place a short distance past the intersection at Hickory Flat. In appreciation for Abel, the Roanoke Fire Department had its ladder truck positioned near that intersection during the noon hour Saturday. The raised ladder displayed a giant U.S. flag and a banner displaying the likeness of Abel’s badge. It had been made especially for the ride by Norman’s Sign Shop of Lanett.

Chief Ronald Cameron of the RFD said the City of Roanoke wanted to show some respect to an officer who had lost his life while assisting their police officers in a chase.

June 20 was Abel’s second anniversary with the Chambers County Sheriff’s Office. He had been hired on Jun 20, 2020, and was a jailer for his first year on the job and transferred to being a deputy on June 20, 2021.

Before the ride started, former Valley Police Chief Tommy Weldon gave young Bryson a ride around the Courthouse on the back of his motorcycle. The young boy absolutely loved it. Bryson rode with his mother, Jasmine Gaddist, in a yellow Camaro Transformer style convertible. The car was driven by Brandon Horton of Columbus. It made for a great ride, and Bryson especially loved it when Chief Deputy Richard Carter flew over the procession in a helicopter.

“I was well pleased with everything,” said Sheriff Sid Lockhart. “It was a wonderful day. I was especially pleased at seeing the local fire departments out in force along the route.”

Just past where US 431 branches off from Highway 77 on the north side of LaFayette, the Huguley Fire Department had its big truck displaying the U.S. flag and a banner depicting Capt. Jason Fuller’s badge. The Five Points Fire Department had their vehicles out in front of the station with the red flashing lights on as the procession passed.

Lt. Michael Creighton of the Auburn Police Department motorcycle unit led the more than 100 motorcycles along the entire route. He was accompanied by Sgt. Wiley Maulvin and Officer Joey Forbes.

Four black and gold SUVs from the Chambers County Sheriff’s Office led off the procession. Sheriff Lockhart drove the lead unit. They had their blue lights flashing all along the way. Then came the APD motorcycle group, the yellow convertible with Jasmine and Bryson, and then several vehicles with 13 close friends and family members of Abel. There was a very long line of motorcycles after that.

The procession pulled out from the north side of the Courthouse and went north along 431 through Buffalo, White Plains, Five Points, and Stroud before taking a right at Welch and heading through Hickory Flat and Standing Rock before taking another right on CR 266, looping through Fredonia and back to Five Points, where they look a left and headed back to LaFayette.

While the ride served as a memorial to a fallen hero, the afternoon portion of the event on the east side of the Courthouse was more of a celebration of life with bouncy rides of the kids, lots of good food and music being played by a dee jay.

B.J.’s Butt House and The Little Red Caboose were the food vendors. The children enjoyed the inflatables, especially going down the Monster Truck Slide.

“It went on until about three o’clock central time,” Miles said. “A lot of us were dead tired by then. We had done a lot that day, but it was all for a good cause.”

Miles and fellow members of the Fuller Memorial Biker Group are planning another event for mid to late September. It will have a theme of suicide awareness and will be a  musical event taking place in the LaFayette area.

“We are looking at having two annual rides,” she said, “one in the spring for the Tallapoosa County Girls Ranch and another one in the fall for Deputy Abel’s family.”