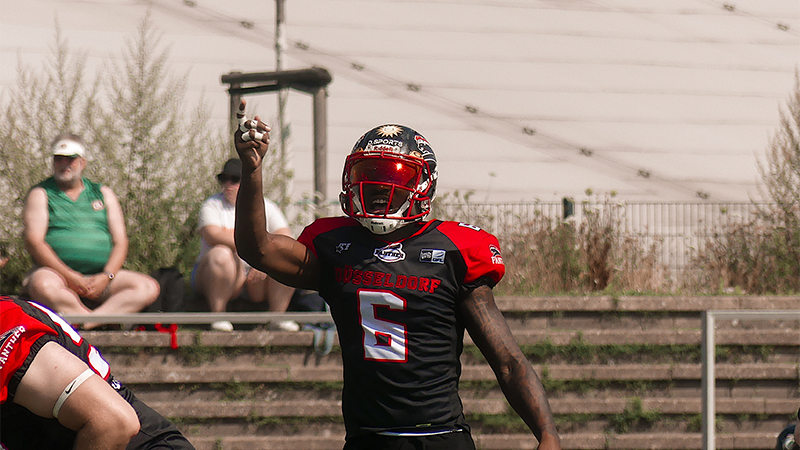 Point’s defensive coordinator, Nigel Lawrence, has been spending his spring playing overseas in Düsseldorf, Germany. When he’s not coaching Point’s defense, he plays football for the Düsseldorf Panthers.

Lawrence is originally from Smiths Station, Alabama, and he spent his collegiate career playing safety for South Alabama.

Lawrence played at South Alabama from 2015 until 2018 before he came back to coach at Point.

“After my college career, you go through the process of going to pro day and getting ready for NFL scouts,” Lawrence said. “You wait to get phone calls, then after the draft, you go through the undrafted process. I didn’t get invited to any NFL camps. The only league I could look at that played in the fall was the CFL.”

Lawrence wanted to play for a spring league, so he found his way to the German Football League.

“I had a few stints with the Philadelphia Soul in the AFL,” Lawrence said. “I did some other combines, and then I eventually signed a contract in 2020 with Düsseldorf.”

In 2020, Lawrence was forced to go back to the United States due to COVID. He’s in the middle of his second year for the Panthers.

“It’s different from playing college ball because it’s American football abroad,” Lawrence said. “Not everyone grows up playing American football here. Over here, the major sport is soccer. There are so many teams in Europe people don’t know about.”

Lawrence has been able to travel a lot during his time in Germany.

“I get to travel and see different things,” Lawrence said. “I get paid, and I get to play football. It’s amazing living over here. I’m able to see new things and see a different life than I grew up around.”

Lawrence will enter his fifth year as a coach.

“When I was going through the draft process, I got my first coaching job at Jackson High School in Jackson, Alabama,” Lawrence said. “I got my next coaching job at Russell County High School. Last year, I landed the job at Point. The rest is history.”

One of the issues Lawrence faces playing in Germany is the language barrier.

Lawrence is still contracted to the Panthers, but he’s open to playing for other teams.

“I love the city, but it depends on the team and organization what direction they want to go for next year,” Lawrence said.

Luckily for Lawrence, the German Football League plays with the same rules as the NCAA. The field size is the same, and most of the other rules are the same.

One advantage for Lawrence is the pass interference rule isn’t as strict, so he can be a little more physical on defense.

With the pop up of more leagues in the United States, Lawrence is hoping he can find his way back to the country.

“My ultimate goal is to play football in the States,” Lawrence said. “The peak of American football is to play in America. Over here, I can produce some quality film to actually shoot my shot with those leagues. You have more leagues coming like the XFL and Major League Football, so that helps.”

“You have to look for an agent, like someone who can put you in front of people so you can showcase your talent,” Lawrence said.

One of the issues Lawrence faces is playing for Düsseldorf while Point starts their season.

He’ll fly back to the United States on Sep. 4, and that will be during the second or third week of Point’s season.

Point will fill his spot with a couple part-time coaches while he finishes playing in Germany. His playing season ends on Aug. 28.