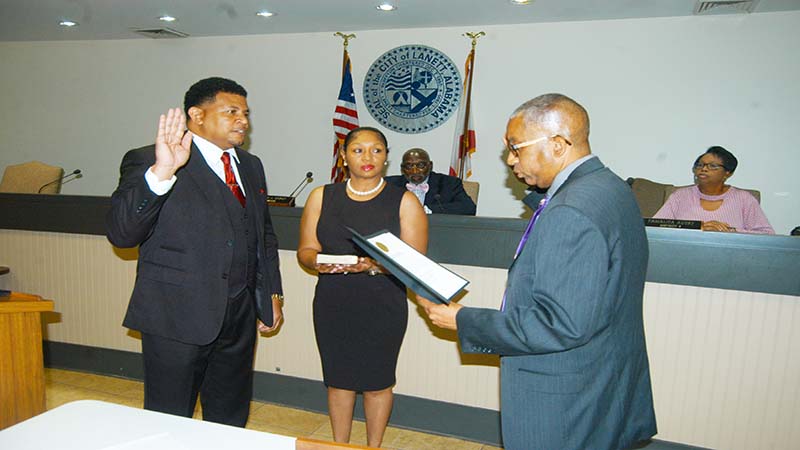 LANETT — A new member of the Lanett City Council was sworn in Tuesday evening. Ronnie Tucker was administered the oath of office by City Attorney Stanley Gray. On June 20th, Tucker was selected in a unanimous vote of the council to succeed Charles Looser, who had resigned because he’s moving away from Lanett to be closer to his son and grandchildren.

Looser had defeated Tucker in the race for the District 3 council seat in 2020. Tucker was the only person to have expressed interest in being named to the position.

According to state law, a successor must be named within 60 days of a council member’s resignation.

A large number of family members and friends were present to witness the swearing in. Tucker’s wife Michelle stood next to her husband and held the Bible for the swearing in. Following the oath of office, Tucker took his seat with fellow council members and Mayor Jamie Heard.

“I want the residents of District 3 to know that I will serve you to the best of my ability,” Tucker said. “I will follow through on what I say I will do.”

Tucker thanked his wife, friends and family members for being there to express their support. “I won’t let you down,” he said to much applause.

Members of the council took turns congratulating Tucker on his election to the council. Council Member Angelia Thomas noted that a strong wife was behind Tucker’s success. Tucker nodded that was true and added that his mother-in-law and sister-in -law had been very supportive as well. “I don’t want to leave anybody out,” he said.

Mayor Heard said that history had been made on Tuesday. The City of Lanett has its first all-black council.

“We have always had good relationships and that won’t change,” he said. “I’m glad to see this big crowd here tonight. Don’t let this be your last night here. Feel free to come back to future council meetings.”

The mayor said he had been saddened with the passing of Essie Mae Harris, a retired local educator who had done an extraordinary amount of volunteerism for causes such as Valley Haven School and the St. Jude Children’s Research Hospital. He said he would be issuing a proclamation declaring Saturday, July 9th “Essie Mae Harris Day” in Lanett.

“When you look at your utility bill this mouth you will notice that you won’t be charged for trash pickup this month,’ Heard said.

Heard explained that he didn’t think it fair to charge city residents given the poor level of service they got last month in garbage pickups.

“Hopefully it will be better this month,” he said. “I have had many conversations with AmWaste, and they have assured me the service will be better. I know they are tired of me calling all the time.”

After a pause, Heard said he was tired of being deluged by calls from citizens complaining about garbage collection. That got a round of laughter from everyone.

The council normally meets on Mondays. This week’s meeting was delayed until Tuesday because of the July 4th holiday.

In action taken at the Tuesday meeting, the council approved two roofing contracts. Repair was needed on two buildings after they were damaged in a hailstorm.

The repair work will be done by Peach State Roofing of Alabaster, Alabama. A portion of the roof at W.O. Lance Elementary School will be repaired at a cost of $84,870, and the roof of an auxiliary building at the L.B. Sykes complex will de repaired for $22,720. The original bids came in greater than that. They were rejected by the council with lower prices being negotiated. The council could do that with Peach State being the only bidder.

The L.B. Sykes building had formerly served as the band room at Lanett Junior High.