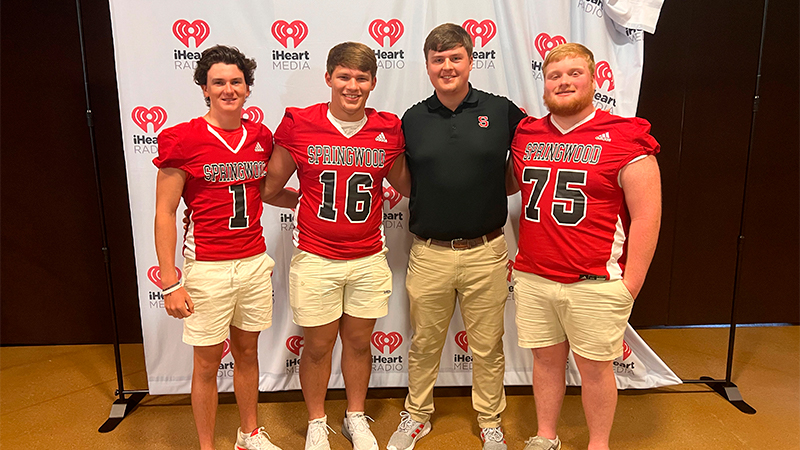 Springwood was seen as one of the more interesting schools at High School Football Media Days because they’re one of two 8-man football teams that participated.

Springwood will be helmed by first year head coach Joey Burch, but he was on vacation on Tuesday. Assistant coach Hunter Plant took over for Burch to help explain how 8-man football will work.

“The coaching staff we have this year is very focused on player development,” Plant said. “It’s going to be a difficult year, but for this staff to take over a team that went 1-9 last year, it really shows the character we have.”

The main difference between 8-man and 11-man football is a couple of linemen and a receiver or tight end are missing.

“It’s the same thing. You just have three less guys on the field,” Plant said. “You learn all the same plays. You learn the same pass and run concepts. Things haven’t changed as much as you think they have.”

Despite 8-man football being similar, Ben Cooper did mention a few differences.

“There’s a lot more open space,” Cooper said. “Speed is going to be a key to win ball games.”

The players explained how Springwood will use two defensive linemen.

One of the challenges Springwood is facing is the fact that they have players overseas who haven’t been able to practice with the team yet.

“Things are lost there with practice, but they can still look at playbooks,” Plant said. “It’s just a seamless transition. With the international students coming in, we at least won’t have to teach them much.”

Another challenge the players have faced is dealing with several coaches throughout their career at Springwood.

“We already had Coach Burch last year,” Cook said. “We love to have him on the field. He brings a lot of energy, and he teaches us about life. He’s the guy who will carry Springwood for years to come.”

“He’s a good coach, and he’s the fourth coach at Springwood since I’ve been here,” Cooper said. “He got us a new weight room and locker room. He’s really into it.”

“We had a lot of coaches come in and make promises that they couldn’t fulfill,” Garret said. “Coach Burch didn’t do that. If you walk in to where the locker room is, it’s being totally redone.”

“Moving down to 8-man, it’ll be a good opportunity for us,” senior defensive end Cayden Cook said. “Eventually, we’ll get back to 11-man.  Until then, this is what we have. The goal is to go win as many games as possible no matter what. One day we’ll go back to 11, but if we enjoy it, who knows?”

Springwood will play their first game against Southern Prep on Aug. 25.