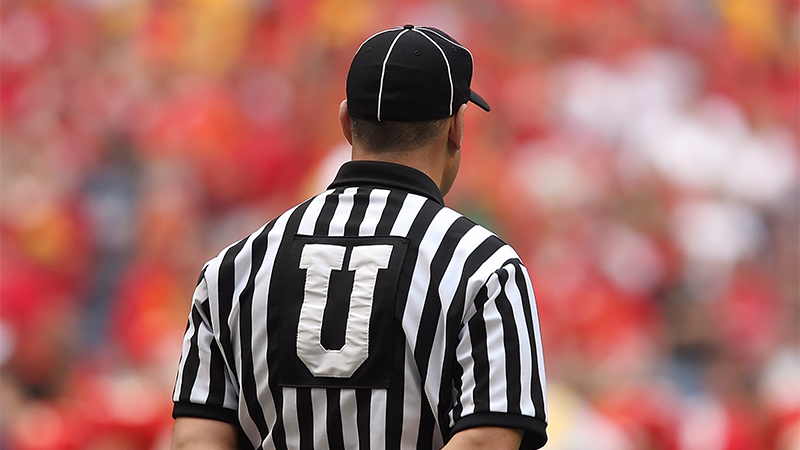 All around the country, officials are quitting their jobs due to several reasons. Once COVID hit, the nation started seeing a drop in the number of officials in every sport.

In the Alabama High School Athletic Association, they’re seeing a major shortage of officials in all counties.

Ken Washington, the AHSAA director of officials, is dealing with the drop in numbers.

“It started with COVID,” Washington said. “A lot of our officials decided not to come back. They were very involved and enjoyed it, but during COVID, some of them realized they didn’t miss coming back. They just decided to have family time and things of that nature.”

There are several reasons why officials are leaving, and one of them is the fans.

“Some of the officials aren’t officiating because of the fan base,” Washington said. “That’s a big deal these days. Parents are following officials to their cars. In a church league this past year, a basketball official was jumped by some adults and some kids during the church league. We need to do a better job of protecting humans. They’re human beings.”

With football season approaching, the shortage of officials has forced the AHSAA to change the way they distribute officials.

“We’re looking at experimenting with district assignments,” Washington said. “Officials from different districts will have to travel more, but it gives us a bigger pool to choose from to make sure we have those games covered. Last year, we had to move games to Thursdays and Saturdays due to the shortage. We’re being proactive in trying to recruit officials.”

The issue with recruiting new officials is it takes a few years for them to learn and adjust to officiating.

“Some of them are being forced into situations that they’re not even ready for, but what do you do?,” Washington said. “You have to have that official out there. We don’t want to put people in that situation. We want to give each school an opportunity to fairly win a competition within the rules we’re governed by.”

“Without these officials, we can’t have contests,” Washington said.

The AHSAA charges $60 to register as an official, but that covers injuries while working among other things.

The AHSAA is also going through a change that involves the ages of officials.

“Officiating is one of those things that gives us an opportunity to stay connected to the game,” Washington said. “You have to have a passion and love for that. This is something where you either like it or you don’t. If you’re not sure if you like it and you have to hear it from fans, then that’s where we lose them. We just have to find a way to keep them here. Studies say if you can keep an official for five to ten years, they’re likely to stick around.”

Mark Hudmon, the Valley Parks and Recreation athletic manager, is seeing similar issues with his officials.

“If you’ve ever officiated, the first thing you learn is you can’t have rabbit ears,” Hudmon said. “That’s hearing everything around you, and you have to block that out. If you do hear that, it’s going to be a long night for you. We have parents that are great, but we have parents that agitate everything as well as far as hassling officials. I’ve seen it get under their skin, especially with the young guys because they don’t know how to handle it.”

Valley Parks and Recreation hasn’t seen as large of a drop off in officials as the the AHSAA, but some of the heckling has been too much.

“We had one guy walk off the softball field one night,” Hudmon said. “They’re somewhat joking, but he didn’t know how to take it. We had some officials who didn’t come back because of it.”

Part of the issue in Valley is the fact that officials aren’t being trained properly.

“I’ve seen umpires that weren’t even close to being ready to come on the field, and we’ve asked them not to come back,” Hudmon said. “Some could do it, but they were kind of lackadaisical.”

Chambers Academy may be in the AISA, but they’re dealing with this issue all the same.

“They encourage us to play on Thursdays, and that helps,” Chambers Academy Head Coach Jason Allen said. “There has been a shortage of officials the last four or five years.”

“Our society has kind of changed,” Allen said. “People have become more emboldened with their opinions on social media. They feel like there are no consequences for their actions. Most people understand these guys are trying to do the best job they can. I haven’t seen anything cross the line, but I’ve seen some verbal abuse. A lot of officials have gotten tired of that.”